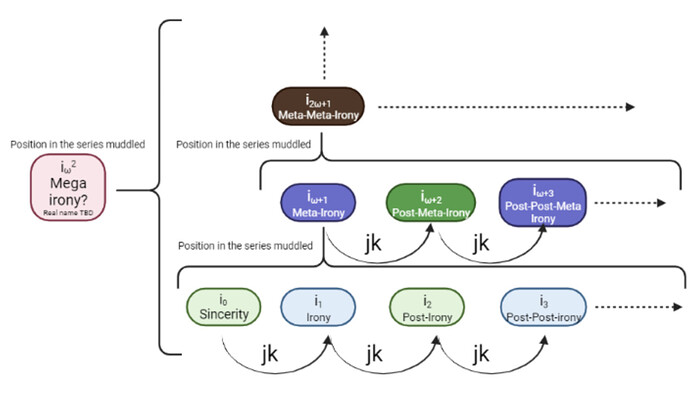 r/Jreg - My take on a table of irony 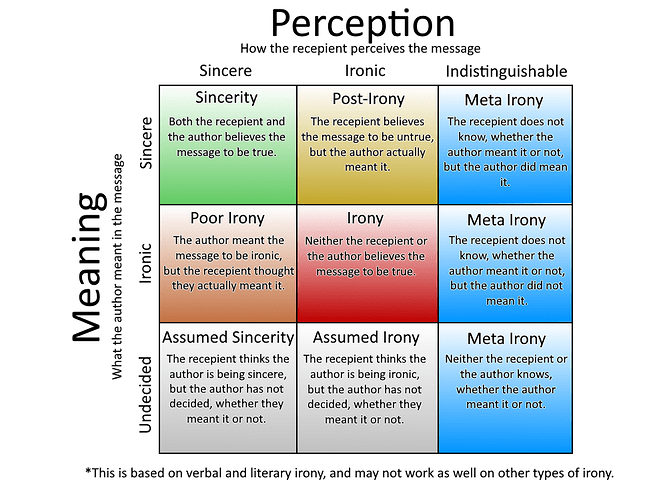 r/Jreg - An expanded chart of Irony 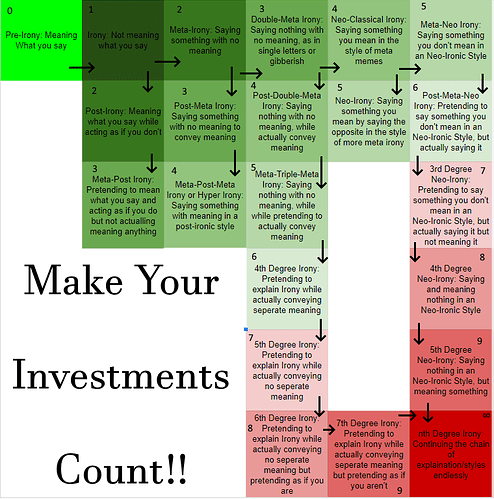 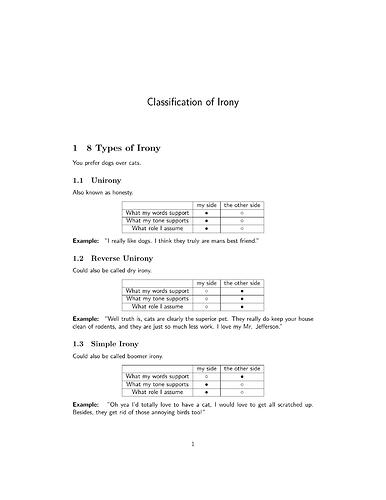 Classification of Irony. 1. 8 Types of Irony. You prefer dogs over cats. 1.1. Unirony. Also known as honesty. my side • • •. What my words support What my tone supports What role I assume. the other side ◦ ◦ ◦. Example: ”I really like dogs. I think...

It's exciting to see the focus on the "sender" and "receiver" at r/jreg. I think that this way of thinking about irony is more intuitive within YouTube and TikTok fandoms because the memetic content usually still has a singular "sender" (real or purported, depending on who made the content). With image-based memes, the sender or author is obfuscated, often from the beginning.

Systematically assessing the possible variations based on a simple one-to-one communication model is a great approach for generating different potential types of ironic communication, and the presentation in the irony (1).pdf document is excellent: 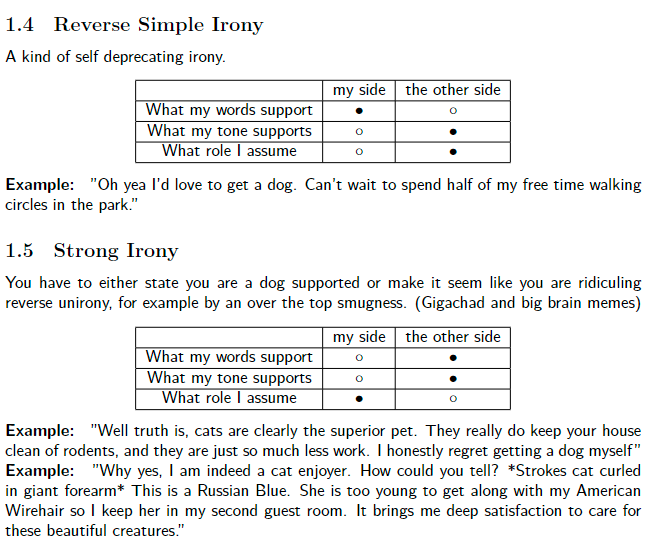 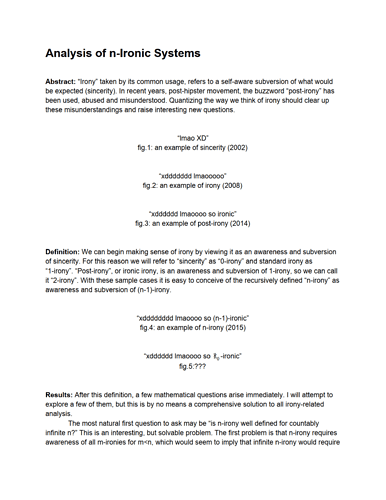 Here's a couple of charts I made around the same time that I don't find particularly useful for my own theories, but nonetheless also bear resemblance to the approaches taken by r/jreg. They might be useful: 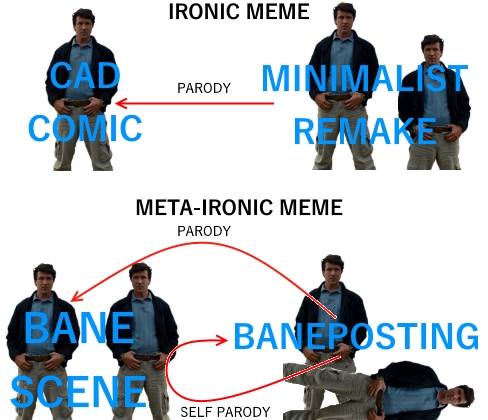 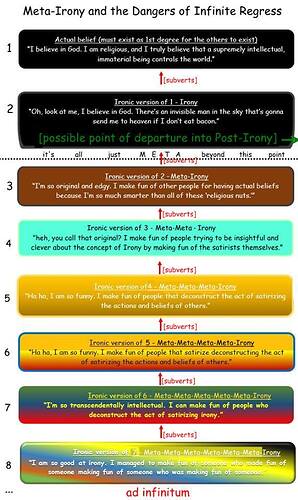 It's exciting to see the focus on the "sender" and "receiver" at r/jreg.

A lot of irony uses the fact that only some people, the "in-group", will be able to understand the message or its point, there exist at least 2 types of recipients. The E meme is probably one of the biggest examples of this, where there is an intended set of recipients who get it, while there are also intended outsiders who do not. (Whether this intention was created by the creator of the meme or by the audience, i don't know)

This raises a somewhat philosophical question, which is: Is irony an attribute that a meme can carry, or is irony an interaction, a relationship between two parts? In other words, is irony inherent to the meme, or to the people interacting with the meme?

It seems like both perspectives are useful in their own way. I'd love to read any literature discussing this, if it has been explored.

This raises a somewhat philosophical question, which is: Is irony an attribute that a meme can carry, or is irony an interaction, a relationship between two parts? In other words, is irony inherent to the meme, or to the people interacting with the meme?

It's certainly a philosophical question, and needs to be addressed as such.

This is probably the best place to start:
https://iep.utm.edu/int-ex-ml/

Classical memeticists attempted to (unsuccessfully) bypass the existing debates about mind and meaning, using universally Darwinist conceptions of the mind and its functions. They frequently reinvented the wheel but worse because of that. Here's Keith Henson (writing in 2003), a member of the memetics-digest mailing list (in response to a proposed "internalist-externalist split" in memetics at the time):

Does a computer file of "War and Peace" read differently from a paper copy? Is it somehow shorthand or a facsimile? I don't think so.

A base pair listing of a gene is an exact representation of the physical structure of a gene. You could get 4 different kinds of those kid-toy snap together type beads and code a gene that way too. The only thing that is common to these different ways of representing a gene is the information. If you look in a journal article, nobody ever makes a disclaimer that this is a paper representation of the hemoglobin gene, they just label the paper listing as Hemoglobin. The least complicated thing you can do is to take this practice at face value and admit the only invariant element is the information.

By close analogy, the form, i.e., paper, brains, or steam engines in which the meme "separate condenser" is encoded are utterly divergent. But
something in each of them can get into the brain of an engineer and change the way he designs steam engines in exactly the same way. That something is a meme. The only thing common over these different forms is information. QED, memes are information in the same sense genes are above.

We've seen the same kinds of debates happening about irony, humour, and whether Pepe is a hate symbol. I think the same misguided intuition (that we must locate and isolate meaning or information in order to study it) is at work in a lot of debates about whether irony is intrinsic or extrinsic to a meme. A huge amount of reinventing without consulting prior research seem to always take place in subcultures as they mature enough to become reflective about their own culture and communities. That's the case whether they're political, aesthetic, comedic, etc.

Memecultures discussing memes developing their own theories of memes is uniquely exciting, because when those new and independently developed theories converge with old and preexisting theories, you can interpolate those theories to generate new evidence about how thinking about memes works. Nonetheless, we here in this research community should examine and consult as much of the preexisting research as possible, so that we can facilitate and encourage such synthesis.

i dont know if this is the right place to ask this question but it came to my mind while reading this thread.
i understand that meta-irony is now commonly known as a sort of incomprehensible/indecipherable/ambiguous irony or something to that effect, but doesnt the prefix meta suggest a sort of self referentialness to the irony or maybe the ironic statement itself is referencing the irony? like for example using irony ironically or maybe using a combination of situational/literary/verbal irony all self referential of each other. its a little confusing, but ive seen it done. im guessing there isnt any consensus on any canon definition of the higher ironies, so it can be confusing mapping it out.
if theres any more sources or charts you would be able to suggest it would be cool to analyze them to try to come to a conclusion on the subject. also if there is a better place for me to ask this question/have this discussion i can move to there.

i understand that meta-irony is now commonly known as a sort of incomprehensible/indecipherable/ambiguous irony or something to that effect, but doesnt the prefix meta suggest a sort of self referentialness to the irony or maybe the ironic statement itself is referencing the irony? like for example using irony ironically or maybe using a combination of situational/literary/verbal irony all self referential of each other.

I think the common characterisation of metairony as "incomprehensible irony" is incorrect. It's no less straightforward a concept than irony. This article will help, especially since it focuses on more primitive and earlier forms of metairony: 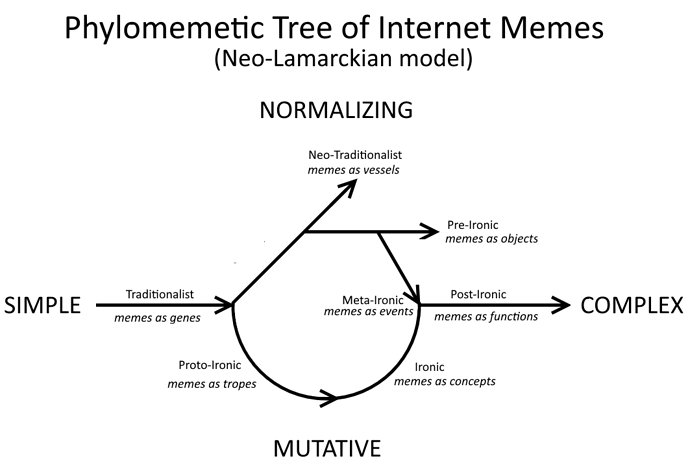 In 2017, at the time of writing, most readers will find it difficult to imagine how different the dynamics of the meme community were in 2014. The sum of every memepage at the time, duplicates or no, was far smaller than a single large memepage...

Meta-irony is easily recognised in conventional template–subcontent memes: the meme subverts not only narrative conventions (just like ironic memes) but they also subvert structural conventions (for example, by adding distortions and lens flares).

(from the article above)