"You're literally insane if you think men play video games."

This might be my favourite meme I made this year. 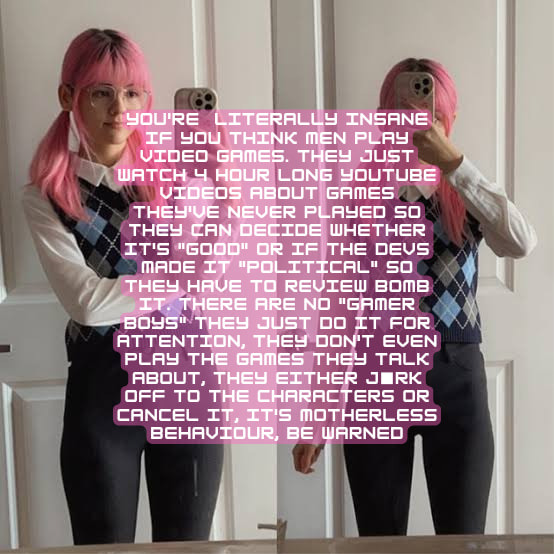 I had been thinking about a more productive and interesting response to the exhausting edgy gamer talking points about gamer identity. The typical response from people who disagree with gamergate moat and bailey positions are basically embarrassing to watch, and reminiscent of typical responses to the "the left can't meme" meme (namely, attempting to prove that, "nooo, girls are gamers"; or that, "nooo, the left can meme"; thereby legitimising and perpetuating the moronic framing that should simply be disregarded entirely).

Basically, the meme is a metaironic response to gamergate logic: it simultaneously mocks the ironic veil of gamer identity and the preironic responses that gamer trolls elicit from their targets. Instead, it inverts the same sexual stereotype usually reserved for women and points out the way that it also applies to men.

The result is that the frame of debate is shifted to whether even men themselves tend to meet the arbitrarily demanding standards for being "real gamers". It's a far more productive topic of debate, since mere recognition and engagement with this meme already makes a novel point. The new framing encourages new questions, such as "what is so important about meeting the standards of being a 'Real Gamer' that we're waging culture wars?" as well as highlighting that many of the more essential positions in said culture wars are usually left unspoken.

It's not especially sophisticated as a meme in and of itself, but I'm pretty happy with the response the meme received: there was a lot of dudes getting angry in the comments on the page post trying to "prove" that the meme isn't true and that "nooo, men do game!" (note: this is what leftists look like when they take the bait on an accusatory meme like "the left can't meme"). Even the stoic, Chad "Yes." response falls flat against this kind of meme whose most important function is to reframe the discourse rather than to make a direct point.

Here's another meme I made with the same technique: 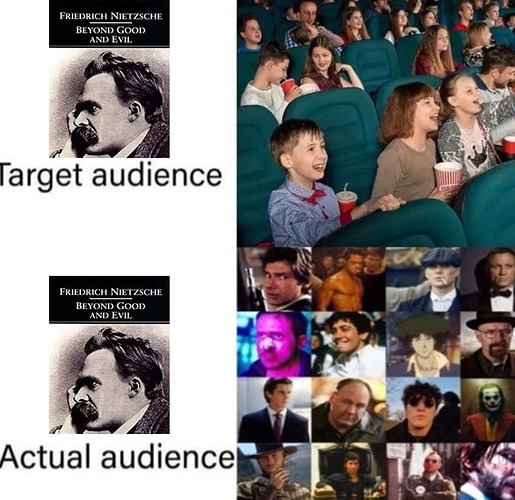 It's an anti-Nietzschean meme that similarly attacks Nietzscheans, by suggesting that:

Some kneejerk reactions that can be expected of defensive Nietzscheans are to:

The limitations of the above two memes are actually proportionate to their advantages. Its metaironic formulation makes it hard to develop constructive discussions around it as a foundation for community, whereas postironic memes excel at precisely this task. Indeed, communities founded primarily on the metaironic strategy (e.g. esoteric right-wing Twitter spinoffs) turn out rather hollow upon closer inspection, no matter how much hype and other signals of a serious movement (namely, reach and money) get involved.

The usefulness of metaironic memes comes primarily from spreading them into foreign contexts where they can elicit upset and highlight some inconsistency in a way of thinking, which might change an opponent's mind or embolden an ally. That's the dominant strategy at the moment, and it seems to work very well for what it's worth, within limits. I think that what we should aim for is metairony in the streets, postirony in the sheets.

The usefulness of metaironic memes comes primarily from spreading them into foreign contexts where they can elicit upset and highlight some inconsistency in a way of thinking, which might change an opponent's mind or embolden an ally.

I'm curious if you've seen this happen Seong. It seems doubtful to me that trolling (which is what this is -- really really good trollbait; is there something to the metairony that goes beyond trolling?) would actually change someone's mind, that wasn't already susceptible to being changed in some other way.

As you note this kind of thing has been done plenty of times before. Has a leftist ever been swayed by "the left can't meme"? It only seems to embolden the circlejerk on both sides of the trollbait, which IMO is of extremely dubious value.

This is a lovely sentence. It seems that the situation nowadays is the opposite, where postirony is the common vehicle for spreading memes, perhaps because post-irony can shield the true intention of the meme to make it less abrasive, and therefore more subtle and surreptitious. On the other hand, meta-irony is usually enjoyed in small communities with non-diverse opinions, where it will generate less backlash. I would like to see people more open and honest in their memeing, and to see people posting more metaironic memes would be a step in this direction.

EDIT: Oops, reading back here I think i totally mixed up post-ironic and meta-ironic here. Sorry! I’m gonna leave it as is, but what i really meant was that metairony shields the true meaning of the meme, whereas postirony is more open and honest.