Sometimes i wonder how deep companies and the stuff are into the meme game. We all know brand twitter of course, but i can’t help to wonder how orchestrated the will smith slap vitality was.

Anyone here have profound insights in this?

I think that memetics are an essential part of corporate success because they make up the entirety of advertising. Every ad attempts to be a meme, and for a long time most meme making was relegated to corporations as they held the resources necessary to get on TV. Very specifically my mind goes to the “Wazzup” ad campaign by Budweiser, which really viral among the average American, even when internet usage was a lot lower than it is now and websites were a lot less centralized. I think memes back then were in sort of a “golden age” (barf) of corporate advertising, as they had multi year staying power, as opposed to the incredibly fast life cycle of a contemporary meme

I think that @squashwhack makes a great point that when mass-communication was less accessible, corporations were definitely pioneering memetic content.

Now that internet memes are a vastly more democratic meaning-making space, however, memes that spread far usually do so by repeated remixing and mutation. Corporations would love to harness this, but most have highly controlled branding and messaging and loathe the semantic risk posed by being associated with a viral meme. A successful example of a well-harnessed corporate meme might be the Wendy's Waifu.

I work in a medium-ish (<150) media organisation in Australia, where a significant amount of income is in sponsored content. In order to win tenders from corporations, the sales team have to be able to pitch specific branding/audience targeting outcomes (engagement and content types are the big ones), and even though I know that those people are quite memetically literate, they'll never be able to pitch memetic material to prospective clients because it is far too volatile.

I think there's also a loss of interest/enjoyment of a meme when most people discover its from a corporation with intent to advertise and profit. When like a memepage does sponsorships, depending on the general "respect" their audience has for them, people react with something like "get that bag bro" or "My hatred for your deplorable actions is unfathomable." In either case, the sponsored "meme" usually gets ignored or actively dunked on.

But on the flipside you have stuff like Fortnite dancing, which is a huge meme and has no doubt done advertising work for Epic Games. If corporations could plant/force memes in relation to their product without revealing their involvement, I think they have a better shot at it.

If corporations could plant/force memes in relation to their product without revealing their involvement, I think they have a better shot at it.

But that's the trick, i feel like they already do this a lot, but we don't know it, since that's the whole point haha.

Perhaps this is going into tinfoilhattery, but some of the disney/marvel movie 'memes' are literary just still image of the movie with a 'memey' subject switched in, but the punchline is pretty much unaltered from it's original source.

This could very well just be planted.

Edit:
Not 100% the same, but similar, is memes of she-hulk currently. I don't follow much news regarding new movies, but i'm now aware that some company is making a movie about this character because of 'memetica' and 'take' culture. I can see a reality where Marvel plants 'twitter hot takes' and 'mommy' memes to promote this movie, something like this MUST have happend at some point.

Good meme is a meme that was made for the sake of shitposting. Whether you slip in the brand in the middle or not, if it's funny enough, it will be a meme eventually.

The disadvantage of coroporate meme compared to traditional meme is the pace they can make. A post may need to be reviewed first by several layer above the creator before it can be posted. This will affect the "hit or miss" nature of meme. Some corporate social media solved this already by giving many freedom on what to post and just let them be funny, for example:
Domino's Australia 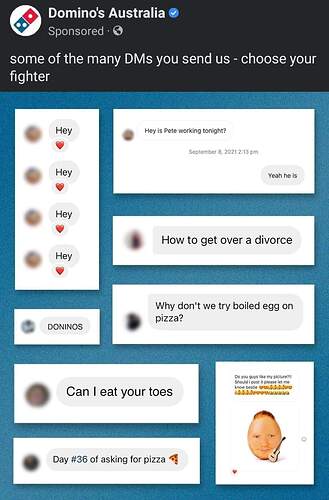 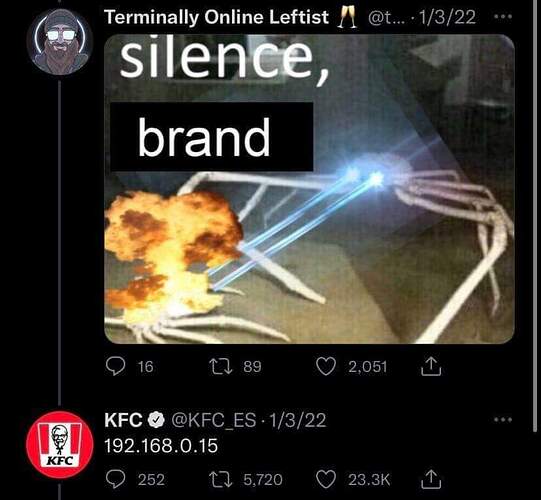 The advantage is, they already have a decent production value and guaranteed audience, just make them spread the brand by themselves to get new audience.

I have a friend who is convinced that dank memes with a corporate reference are somehow spawned by the corporation.

I don’t doubt they enjoy the free press, but corporations have accountants and lawyers that would stop it imo. 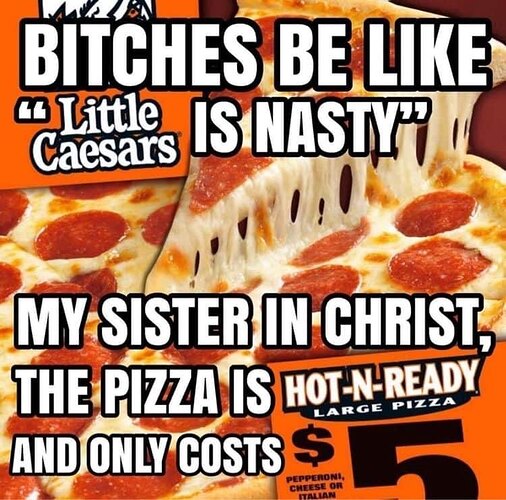 Consider @squashwhack's point that memes are native to marketing:

I think that memetics are an essential part of corporate success because they make up the entirety of advertising. Every ad attempts to be a meme, and for a long time most meme making was relegated to corporations as they held the resources necessary to get on TV.

If you are a right winger biased in the direction of "the left can't meme" who wants right wing memers to seem better than left wing memers, then you would be inclined to always contest the political nature of many memes with leftist ideological underpinnings, and filter them out from the sample. This metamemetic strategy goes hand in hand with hair-trigger reactions from conservative fans against (say) minority representation in films and movies. By systematically excluding political beliefs which they agree with from the realm of "politics", they attempt to exclude them from critiques on the grounds of "civility" which involves "keeping politics out of video games". The memetic refrain is telling: "they made it political!" 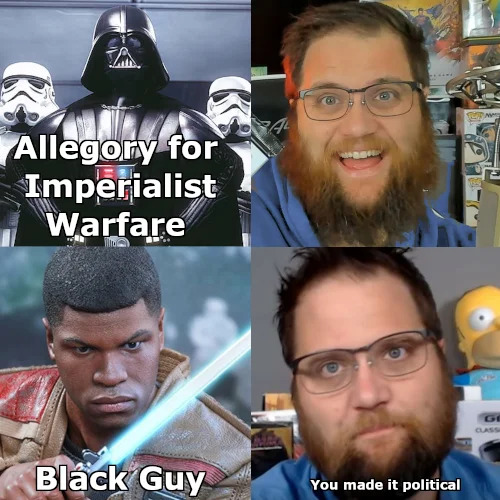 Obviously, the correct response is not to deny that media is political. It's to respond: "Yes. And?"

While planting memes covertly have been done, do you think corporations and other well-funded actors on a platform limit memes to their advantage?

I've seen in some netspaces that, previously independent shitposting pages and groups began to pander out to normies with their contents. Memes (and the topics being memed) start to align with the well-funded actors' agenda more often than not, raising concerns about any unknown incentivization towards the key page/group members. Perhaps, these normified pages give "breathing room" for social media execs, who can now propagate memes without needing to be qualitatively top-notch.

While the above example involves some politics, I think companies are complicit one way or another. With the rise of celebrity culture, the literate marketing personnels would network with shitposters as if they are any KOLs (Key Opinion Leaders), and engineer the meme flow to their benefits. Controlling the "memescape" also means dictating the future definition of dank.

I think this dimension is also worth looking at, especially in smaller meme language-cultures.