Since last year, @Jreg and I have met to chat about the layers of irony several times. The first time we chatted on his stream, I mentioned that wholesome memes are a paradigmatic case of post-irony. He requested some examples of discussions around this idea, so I went and found some from /tpmg/ (our private discussion group attached to the The Philosopher's Meme).

I'll offer some commentary in the replies below, as a way to review and revisit the discussions from the past 5 years. There's also a lot of additional discussions in the /tpmg/ threads linked within each section from when each thread was initially created.

Random Thought: Dat Boi could be considered a catalyst of the 2nd-wave "wholesome memes" trend*.

Dat boi spiked ~May 10 of last year and ended the rapid drop-off end of June. By comparison the first (albeit small) jump in searches for "whole some memes" started end of June and spiked starting on July.

Dat boi was a very basic, cutesy meme that had an almost entirely positive body of work centered around it. It never got subverted like pepe or trash dove and never gained any actual meaning beyond its literal representation. The humor was entirely "haha what a cute amusing frog". In a sense it was the first 2nd-wave wholesome meme*.

*1st wave happened with the start of /s4s/ without a doubt, according to google trends the first spike in the search for "meme/memes" happened several months after /s4s/ was made. Which raises the question of /s4s/ literally starting the main-stream-ification of memes period.

EDIT: It was subverted but apparently it was obscure enough that it didn't matter. I guess because it didn't make headlines like trash dove or pepe did. Also I guess it mostly makes sense as the link introduced the mainstream to the idea of memes as able to be pure/wholesome.

I think that this post was prescient and accurate. Sharing something that's pleasant to look at has become a really big part of memeculture, and it's great: 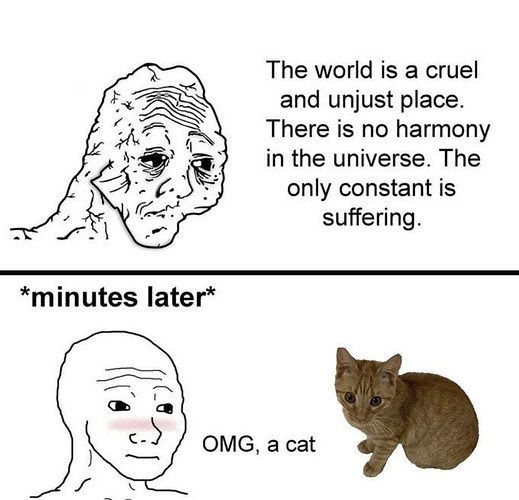 These days, we communicate with friends through chat more than anything else. The way that we chat in the 2020s is fast-paced, intimate, flexible, and much more tolerant of noise. Content can flow easily in such environments without having to be coherent, fully-formed memes that explicitly state some point in full sentences; the vibes and the lore contextualise them effectively enough. Also, it's more convenient to type a message to go along with the image, instead of baking in the captions into it. Consider that ironic memes were modelled after Twitter screenshots, often edited by people who don't use Twitter to look like they're screenshots of a tweet with an image.

Using particular pictures and videos of animals as memes (cf. using animals as memes) has become commonplace over the past 5 years as well. Here's an example called "Gusic": 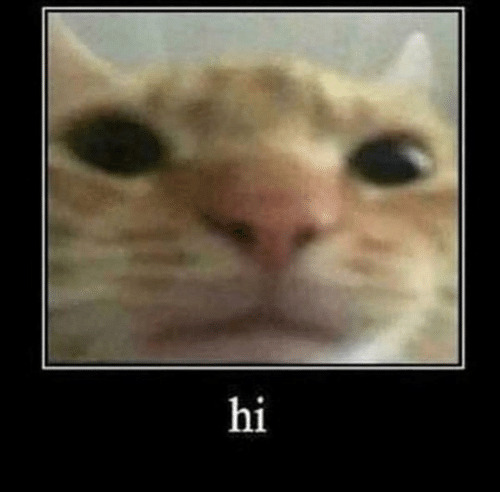 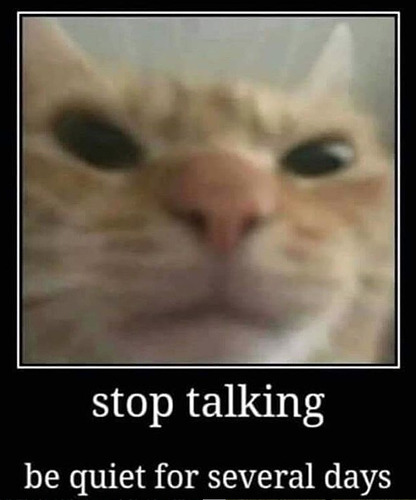 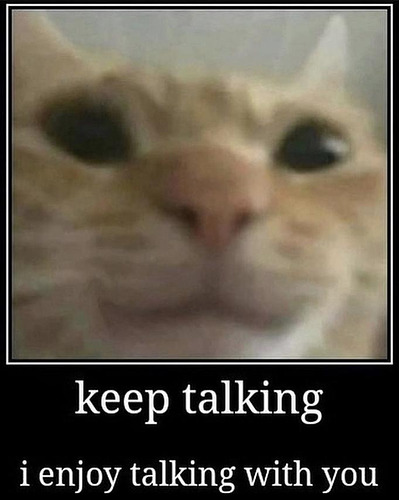 Using low-resolution, "front camera" images of people and animals as memetic characters became popular around 2017-2018. Sometimes they develop identities and lore, but the primary usage is as emotes and reaction images for users, and the sense that the animals are stable characters with a backstory is weak (compared to LOLcats, Advice animals, and pre-ironic Doge). This lends them to variously ironic modes of communication by all manner of users. The animals don't retain a sense of identity or persistence when they are used as memetic elements; they're like assets that make up the meme in order to provide a stand-in for something cute or as a texture to give the textual content a certain vibe.

Low-res animal pics are used interchangeably in ways that meme characters aren't: the animals aren't the meme; the texture and general aesthetic of the images are the meme. Hence, wholesome memes don't have to be so insistent about their wholesomeness (e.g. by telling you to drink water and that you matter and so on). A lot of the time, a blurry picture of a cute animal works far better. 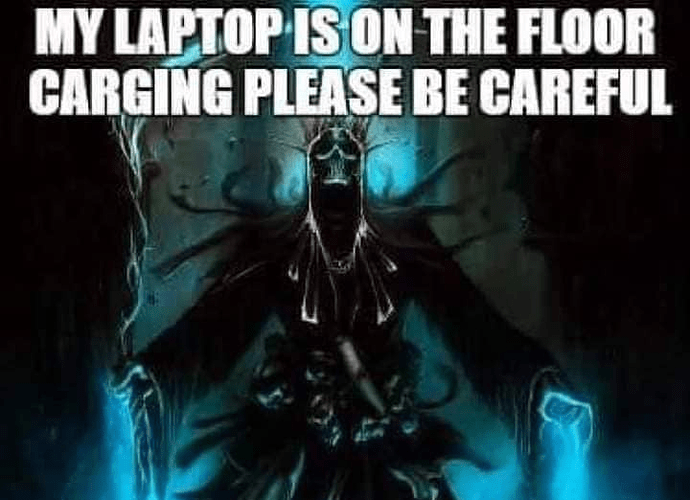 The winning formula for an ironic meme is an intriguing image + text clashing with the image.

Impact font memes let the memer combine the image and the text more closely than were they to put the caption above the image separately. One effect of overlaying the text is that the memes become interlocutory: the memes look like they're directly addressing the viewer. Captioned images (i.e. text on top or bottom of the image) on the other hand give the sense of the image being described by the caption (e.g. "when you X:" or "me and the boys when Y:" type memes). Therefore, captioned memes put the text first (you read the text first and then parse the image in context of the text) whereas overlaid memes put the image first (you view the image first and then parse the text in context of the image).

Here's two of my favourite pages that have really advanced the genre (the laptop one above might even be from the first page; I'm not sure since they've been posting since 2017 and I haven't seen them all): 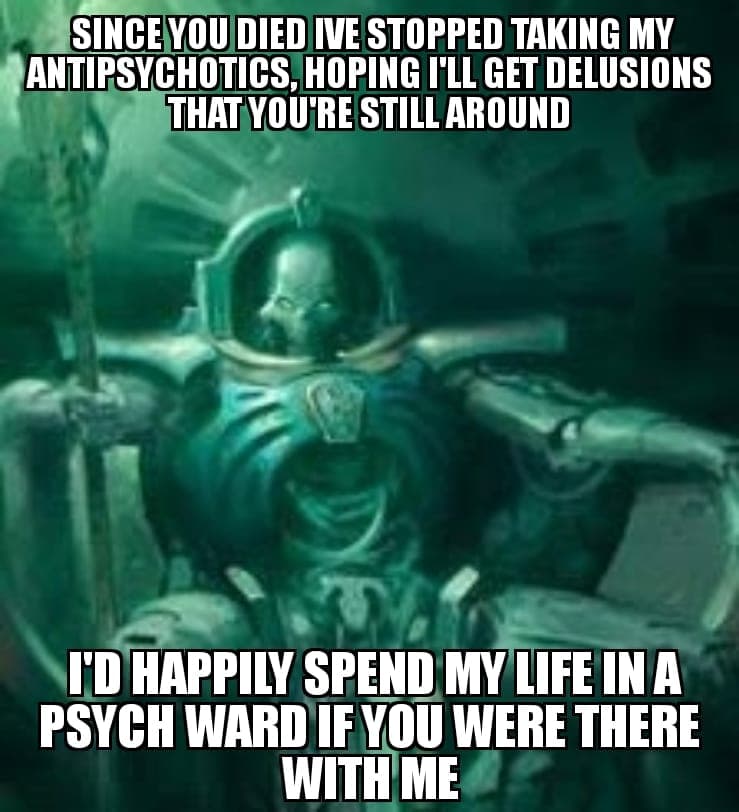 Example of a post from I write words on anime girl pictures: 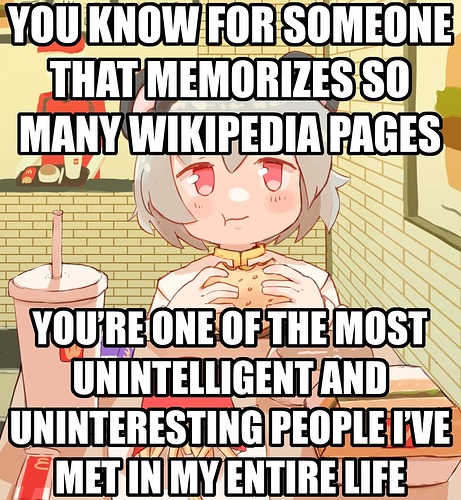 Both pages use the top-text/bottom-text format to tell stories, usually a vignette depicting socially unacceptable behaviour. I write words on anime girl pictures in particular creates POV memes in which the audience is implicated in these scenarios. The subject being addressed by the meme is almost always a socially inept pervert, who is nonetheless interacting with the anime girl (often with absurd descriptions of sexual fetishes being played out). On the other hand, the memes on Warhammer 40k Sadposting are written in a confessional tone from the perspective of a socially inept loser, and many of the memes involve stories of his failed love life.

Both pages sometimes delve into unusual topics or themes, sometimes serious (e.g. mental health or politics), and such memes are just as effective (if not more). They're almost never wholesome, but are often postironic (I write words on anime girl pictures frequently leans metaironic in their tongue in cheek celebration of the ostensibly repulsive fanbase). Note that the memes depict fictional narratives: we can't use "did or didn't they mean it?" as a way to determine whether the meme was ironic, at least not in the ordinary sense. Insofar as their fictional narratives are concerned, the two pages create stories intended to be imagined as real yet experienced ironically. So, they are postironic. And writing to an indeterminate, online audience always involves fiction to some extent. Perhaps one of the commenters saying "literally me" actually really is just like the person depicted in the meme.

(2022) "A new, wholesome version of a meme that was already wholesome to begin with" 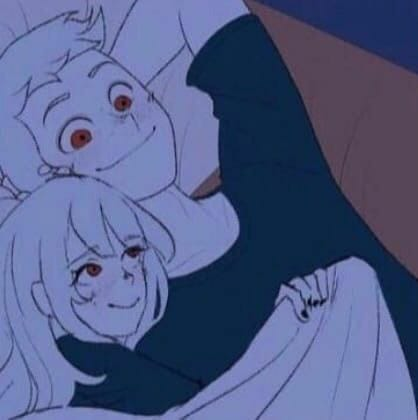 It's funny that someone made a "wholesome version" of the meme, given that the original comic already implied that the two are a couple: 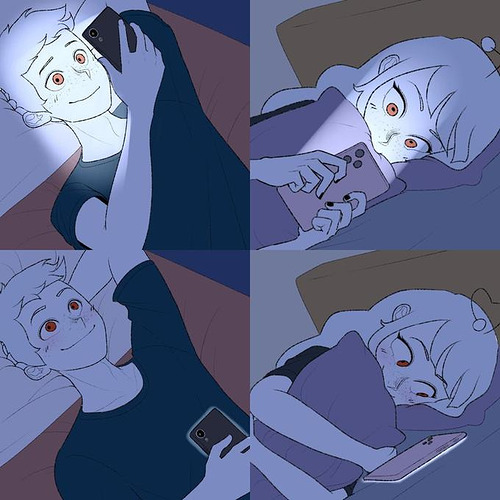 The definitive Happy Ending seems unnecessary compared to the original comic, but given the nightmarish parodies that had been made of the comic, I suppose it is subversive (but I think simply posting the original would have the same effect).

Example of a nightmarish parody: 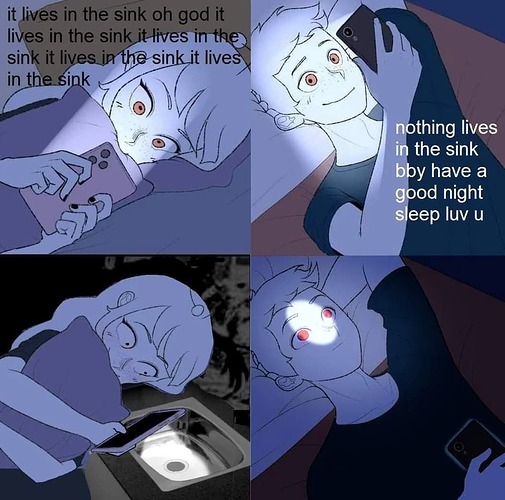 Posting of my own free will 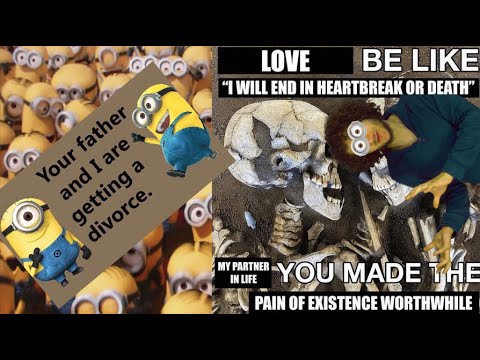