Title: Colonizing Pepe: Internet Memes as Cyberplaces
Author(s): Jérémie Pelletier-Gagnon, Axel Pérez Trujillo Diniz
Year: 2018
Journal: Space and Culture
DOI: https://doi.org/10.1177/1206331218776188 (Open Access)
Abstract:
This article explores the Pepe the Frog Internet meme through a spatial approach that targets the ways in which netizens attempt to repurpose it, so as to build a communal space in which meaning is constantly negotiated and hijacked. We argue that Pepe the Frog and other memes can be interpreted as “cyberplaces” defined as computer environments that display the ideological polemics between netizens as they struggle to build a sense of community. Moreover, the rhizomatic stratification of such cyberplaces reveals a more nuanced view of meme dynamics, one that takes into account the agency of users as they efface and impose meanings on memes, not unlike the process of deterritorialization enacted on places.

For Dawkinsians such as Dennett, memes colonise minds. Along this spatialist view presented by Pelletier-Gagnon and Diniz, minds colonise memes.

Our methodology is based on a spatial conception of Internet memes. We explore the process of generating meaning in Pepe the Frog by analyzing the meme as a contested site where netizens hijack and repurpose it according to specific ideologies. Drawing from this spatial approach, we define Internet memes as multilayered cyberplaces that are located around a single image contour, occupied and repurposed by netizens in the efforts of building a communal space. By “cyberplace,” we mean a computer environment where exchanges between netizens take place, generating a communal space that is especially relevant to Internet memes. A particular forum or platform can be a cyberplace insofar as netizens actively participate to create a sense of community in that computer environment. The fact that such forums are sites of meaningful exchanges between netizens is what makes them cyberplaces . Reddit, Twitter, or 4chan are not simply occupied spaces in the Internet, but instead are thriving communities that are actively establishing their limits and purposes. A place—contrary to a space—is a site of meaning, a site where agents create, efface, and accumulate symbols. That is, a place is pregnant with meaning, whereas a space is aseptic, as a geometric plane. We understand memes as multilayered cyberplaces, not just symbols. The problem with a symbolic approach to Internet memes is that their multiplicity in terms of differing representations and meanings is hard to capture under a single symbol. [...] We consider the contours of Pepe the Frog, its semantic and visual plasticity, tracing several of its layers as a cyberplace. Whereas several scholars have identified the importance of virtual environments in our contemporary culture, only a few scholars have chosen to reconsider memes under a spatial methodology.

This understanding of memes as places is really good. I've referred to it as "makeshift contexts"; memes are like the boards of a board game, and each time someone posts a meme, they begin a new session of the game. From my article with Masha Zharova (2017): 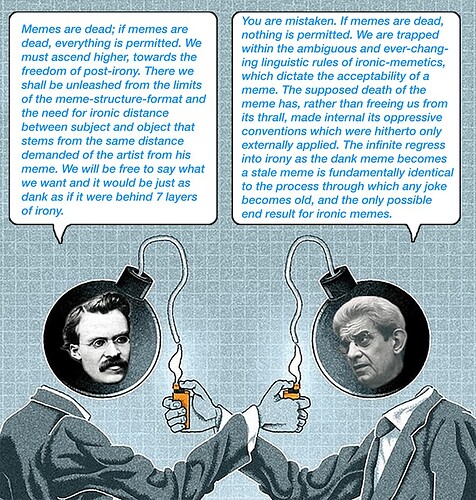 Previous anti-cooption strategies operated under the assumption that the function of memes was to faithfully carry incorruptibly-encoded messages into other spaces, but post-ironic memes conceded this impossibility and instead became the locus around which makeshift spaces of sincere subcultural exchange could occur. Whether the memetic objects could be misused, co-opted or commercialized became a non-issue: the real value of the community was recognized as something that could not be stolen merely by copying.

It makes sense to consider a post as its own "cyberplace" since it is a place where exchange between users takes place (presumably, the OP posts a meme and other users reply). If we can take a webpage to be a cyberplace, then presumably a post in a feed qualifies as well.

The article takes a peculiar turn when this cyber-placehood is extended to "the meme" (as defined according to its recognisability as the same meme across such instances). Pepe the meme is ostensibly contested and colonised by users on different platforms (and thus via different webpages), because:

What we really refer to when we talk of Pepes is not a specific character or entity, but a spatial contour organized around certain visual characteristics that circumscribes the ontology of the meme, its demarcation from other ones. It is the anchor point that structures a memetic place where different interpretations of Pepes will struggle for legitimacy through the occupation of the majority of the meme territory.

I think this is incorrect. It seems to me that an entity has to allow for an approximately concurrent interaction of some sort between the people who interact through it in order to deserve the label "cyberplace". It is indeed intriguing to highlight the fact that users on 4chan and users on Reddit (or even users who don't use either sites and are protesting on the streets using a picket with a hand-drawn frog on it) may "interact" through the use of the same meme. But the same could be argued (I think even more convincingly) for entities such as languages, money, disease, or the wing-flaps of a butterfly.

It is nonetheless intriguing, and fun to consider the variegated metaphors of cyberphysics and how much it differs (whether metaphysically or by failure of analogies) from actual physics. For example, if you think time is somehow not real in any ordinary sense on the Internet, then maybe my arguments don't defeat the spatialist view posited by Pelletier-Gagnon & Diniz.

After all, I also must bite the bullet on the strangeness of claiming that a webpage is a place, when the way that people interact with it and with each other through it is by making it appear at once on many screens on many devices (usually one for each person). That sure makes it sound like I'm saying "a place" can somehow be in multiple "places" at the same time, and also that this is the way that "places" typically exist online. I'm not sure if I can defend that kind of position!

Reading thru this later

Thanks for sharing this article. It has some overlaps with a preliminary exploration of Pepe's interpretant communities on reddit that I did earlier this year--I scraped data from a series of subreddits which host Pepe the Frog memes, and I'm hoping to do another run of scraping through PushShift API to get more historical data to compare with. I'm out, but I'll post some of my findings/word clouds when I get home. The data showed a big discrepancy between the ways that differing communities (explored through subreddits) talk about Pepe the Frog, Matt Furie, and the meaning of the meme.

Something that strikes me as really interesting is conceptualizing memes as play, like a shared fantasy or dream. I wonder about the potentials for critical and speculative play through memes.