I've been working on developing a meme studies course (MEME101). I've got the first draft of the syllabus done and I've tested parts of it with a few people. 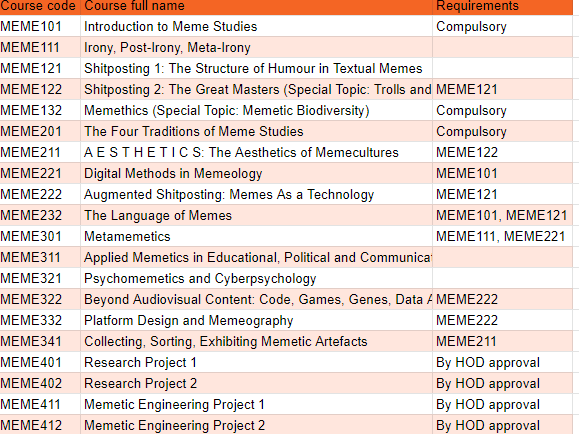 We currently have a Moodle instance up and running on courses.memestudies.org which I'll have to finish setting up once I finish writing and recording the lectures. To do that, I will need to write the course outlines, the readings, provide some instructions on how to learn, and set up a space for students. I will also need to think about assignments or exercises.

I'd suggest that the student be able to choose a specific emphasis (depth) while also requiring they take courses in various topics for breadth. This is how many degrees in many disciplines are structured, at least in the country where I attended university.

Some possible "tracks" for depth of study / specialization could include

Beyond some required prerequisite / intro courses, students would need to take at least 1 course (or however many) in each of these topics for breadth and at least 5 (or whatever number) in one as their in-depth focus.

Moving forward, I'd suggest designing specific courses that could fit into one or more of these categories to offer a little more variation. Some courses may not be offered every semester.

Some challenges to consider: 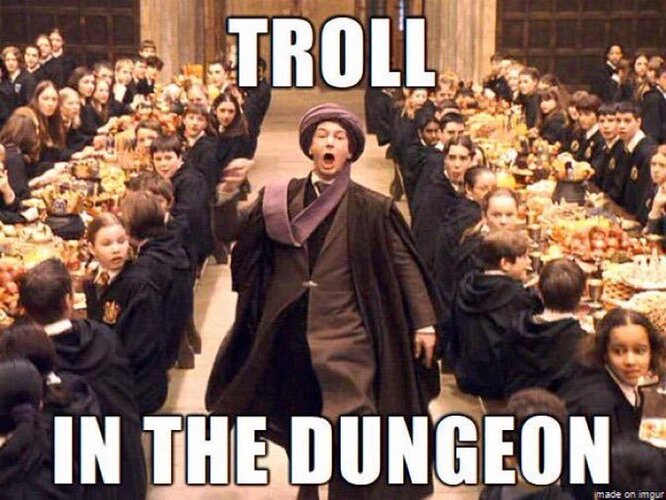 Of course, this issue has less to do with the degree itself and more on how we as a community of educators might decide how to build and maintain classroom norms in such a course of study (especially when it comes to, for example, issues such as hate speech). I thought it was worth mentioning here because I can see such great potential in a Meme Studies degree but I also am very aware of the full range of people who would be interested in such a course of study, and ... uh... some of them might very well be trolls.

Looking forward to your thoughts on this! I actually really love curriculum design so this is right up my alley.

Some possible "tracks" for depth of study / specialization

Yes, that's brilliant! And that's going to be a natural way to set things up from the beginning, since all current meme studies researchers have a background in something other than "meme studies" (as far as their academic training is concerned).

Departmental systems within the academy

I think this would be a big challenge as well. The way that academics studying novel phenomena that seem very likely to benefit from interdisciplinarity are self-organising is more "post-disciplinary" (i.e. abandoning disciplinary boundaries altogether in favour of organising around specific themes, problems, activities). COVID-19 research is a good example of a postdisciplinarity, and so are TikTok research or Discord research. Meme studies might benefit from the same approach. I wonder what that would look like in practice. Would professors and instructors have "home base" departments and participate in meme studies through a special structure that isn't a department? I think it would be great if we can put together resources and infrastructure that lets them do this with little overhead, like setting up a club using a handbook.

Aside from logistical problems multiplying themselves whenever more than one department gets involved, I think students get confused by the gulf between how different disciplines think. They all have their own cultures and traditions in terms of what counts as knowledge, which ways of learning are encouraged, how seriously students are supposed to take which parts, and so on. Students who can handle interdisciplinary thinking and learning are few and far between. I would say that helping students to identify and utilise knowledge from one discipline in the context of another is key (it's gold if that lets them reduce their workload, because then the benefit is immediate and obvious).

Yep, that is indeed going to be a major challenge for the educators. I think it's always the case with subject matters that don't have clear-cut answers. I'm part of a group about teaching philosophy, and some of the horror stories are too familiar, both from the classroom and philosophy-related communities online.

That's a really good idea, and many meme researchers got their start doing precisely that, so I think adding structure and rigour to this existing practice is all but guaranteed to be useful.

I've been tinkering with another idea that's kind of an inverse of this approach (of starting from what the researchers are already doing): a way to collaboratively map out potential subfields of meme studies, by inviting researchers to design curricula based on their respective specialisations.

If we were to put together a learning or teaching guide on "how to specialise in meme studies", then I imagine most end users would be either students looking to mix and match papers (e.g. picking up linguistics papers because they want to learn more deeply about how language is used in memes, and the guide suggests that it will be helpful), or educators incorporating new materials into their classes.

I think it might (at least initially) look a little bit like a series of reading lists on different subtopics within meme studies, which can then be connected together to form something like the "tracks" you mentioned. What do you think? What else do these "starter packs" for tracks need?

It looks really good, but I think it’s missing some courses on what… humor even is? Why do we laugh? Why the fuck do we laugh at absurdist memes? How has humor changed throughout the decades, seperate from memes? I know it’s hard since it hasn’t been studied that much, and that it will also be a natural part of other courses, but maybe it should be distinct class?

Great point. I've been gathering some intro material on humour so that I can include a class or a section, but I'm not sure where it would fit in the best (maybe at the start?). It's hard to find a single source on humour that's got everything, but there's a huge amount of research out there!