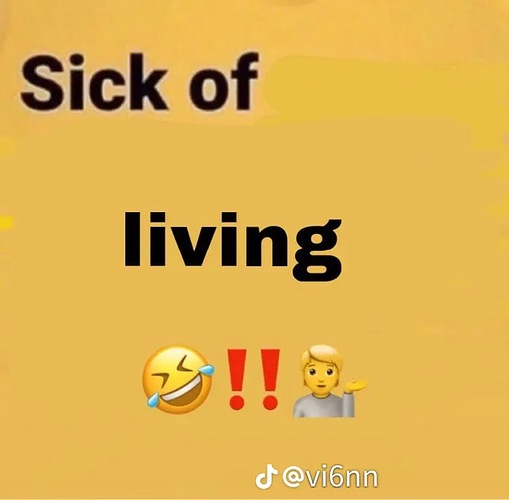 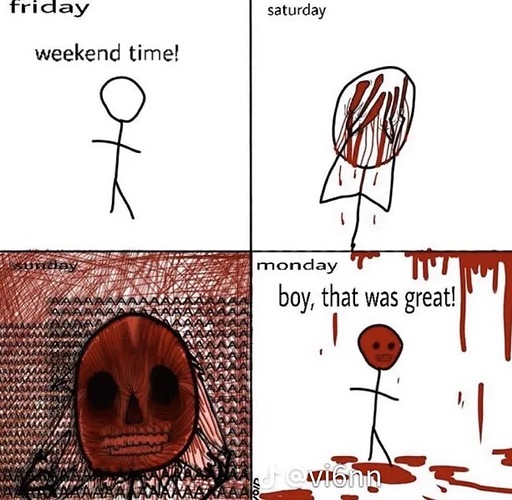 These are examples of the normal schizopost, they often carry messages of struggling with depression, losing grip on reality, and suicidal thoughts and ideation. They are ironic in the sense that they are subversive of formats, for example the first image shown is ironic as it's treats the very serious subject matter of longing for life to end as a lighthearted joke as evidenced with the emojis, specifically the

. However the message is also post-ironic as it's trying to convey very genuine feelings held by the poster and much of the viewing audience. Its position as both ironic and post-ironic without being meta-ironic is very interesting and shows the level of ironic complexity possessed by the newer generations on TikTok. 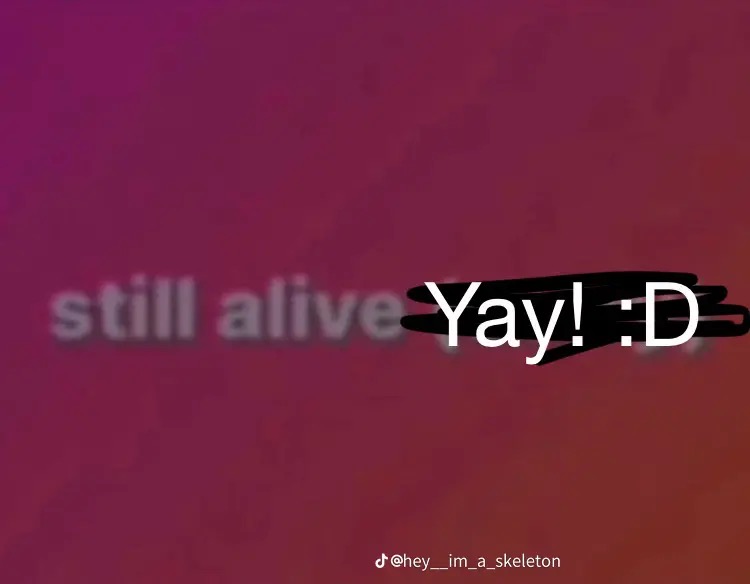 image750×974 87.5 KB
These images are also part of the schizoposting scene, but attempt to use the conventions to return to the positive messages these images were meant to convey when originally made. This can be seen as part of the recent post-ironic wholesome meme movement. However look at this image 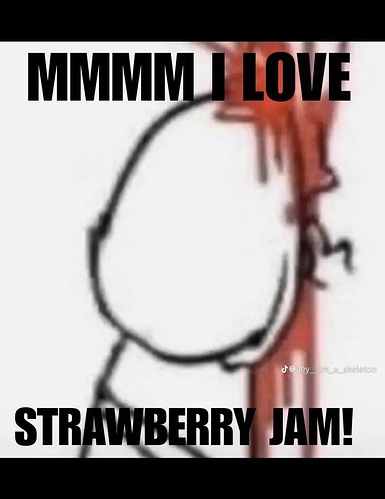 image750×974 78.7 KB
It is also part of the wholesome meme moment in schizoposting but this time it's a little different, it carries an edge that weren't shown in the other two, but still exists. While these images have positive messages in the text, the subtext still points to the depressive feelings shown in the baseline. While it can be seen as positive, it can also be seen as a cover to make the posters feelings more palatable, as a way to cater to the neurotipical audience. Thus we have post-irony and post-post-irony.

The irony in TikTok meme trends is very complex and could definitely use more research, but hopefully this acts as a baseline we can build apon.

schizoposting proves that irony is cathartic, attempting to vicariously experience positive emotions through memes and using humour/irony to cope and express emotions that are not socially acceptable. i think it might be a little bit meta ironic or at least ambiguous irony because while the poster is probably serious to some degree it is hard to tell what level they are on ha.
i found that this even bleeds through into meatspace, often you'll hear people in gen z joking casually about suicide and other mental health issues. usually in a hyperbolic way but sometimes theres hint of sincerity, its normalized. i think this meme/trend is a pretty good representation of gen z's mental state and its definitely interesting to see where it is going!

Its interesting there is a trend of hmm today I will memes in a similar vein often dealing with existential themes or just blatant explicit gore/intensity. It began as a format of naively getting hit with horrors of reality. however it is often subverted even within the format (heres an example)

There is an implicit understanding that those who are going through this intense kind of pain depicted in the memes understand and it is almost a socially safe way to call for comradery in a post-ironic way (you can always play it off as a joke despite the shred of truth there).

You can't just sincerely express your feeling online as that would be a violation of a social more and you'd be labeled cringe or a bummer. This is in spite of a majority of the same people labeling things cringe feel similarly.

Even if on the whole you can function day to day you sometimes drift off and feel an intense feeling or an inappropriate thought. The meme is a micro outlet for these feelings as well as a reaching out for companionship denied by an alienated modern world.

The thing I love about this one I posted is that it shows that even "normal/typical" people feel these emotions too. It almost breaks through back to sincerity (though it took a lot of work to get there clearly)

interesting way to put it. there's definitely something special about the way it can intentionally carry different meanings depending on who views it, and that the meme could perhaps become self-aware of that fact in itself. i'm not totally sold on the idea that it is therefore post-post-ironic, though. could you elaborate on that?

The reason why I say post-post ironic instead of some form of meta irony is for a couple reasons.

That's intriguing. I think I get the intuition you are explaining. I consider there to be four kinds of irony based on logical distinctions between them (post-post irony is a form of meta-irony in the way that I understand it; but I think you are quite right that it's an interesting enough case to deserve its own name and analysis).

We could consider four cases in which a belief A and a belief Not-A are simultaneously expressed in a single meme:

The above is isometric to the Buddhist tetralemma (catuskoti): 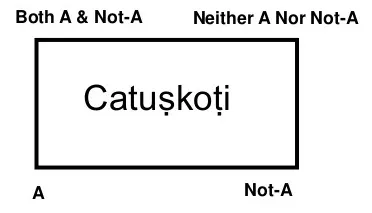 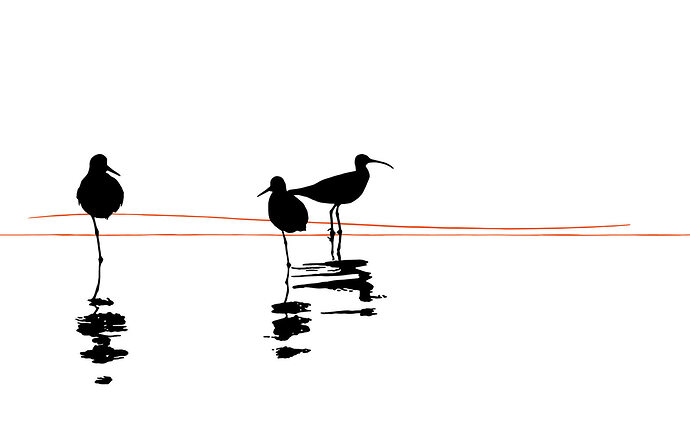 Buddhist philosophy is full of contradictions. Now modern logic is learning why that might be a good thing

You can't just sincerely express your feeling online as that would be a violation of a social more and you'd be labeled cringe or a bummer. This is in spite of a majority of the same people labeling things cringe feel similarly.

Even if on the whole you can function day to day you sometimes drift off and feel an intense feeling or an inappropriate thought. The meme is a micro outlet for these feelings as well as a reaching out for companionship denied by an alienated modern world.

I really like this analysis. It's a kind of performance art of the mind, in which the public display of the flow of consciousness precisely is the point. It's different from the kind that was produced by modernist writers a century ago, in that people attach a degree of realness to online communication (the same is sometimes the case in fictional nonfiction literature, however). There's an ambiguity to the "truthfulness" of expressions like this, because the author is not merely creating fiction, yet expressing something that they (presumably) do not agree with themselves.

I think it may be a neuroscientific or phenomenological question as to how thoughts occur: it seems to me that the brain is first and foremost automatic, and that the conscious mind halts and sorts some thoughts and permits others, filtering out those it disagrees with and expressing the rest. Deliberately disrupting this process (seems to me) to be a time-honoured method of creativity (e.g. make the filter more permissive, such as with improv or writing drunk; make the filter less permissive, such as with quantitative analysis or rule-based storytelling).

Thanks for linking to writings about the Buddhist tetralemma. It is actually something I've been unconsciously looking for since my logic professor told me that "¬¬Φ is always equivalent to Φ". I'd heard other claims in Buddhism, so I was initially confused, but I assumed that they were different approaches and swallowed the pill for the course. Now, knowing how these are different approaches that split with the axiomatic establishment of the law of no contradiction and law of excluded middle, everything makes more sense. Thanks!

New developments game been made in the schizo meta, namely the introduction of absurdist memes into the content flow of some accounts. 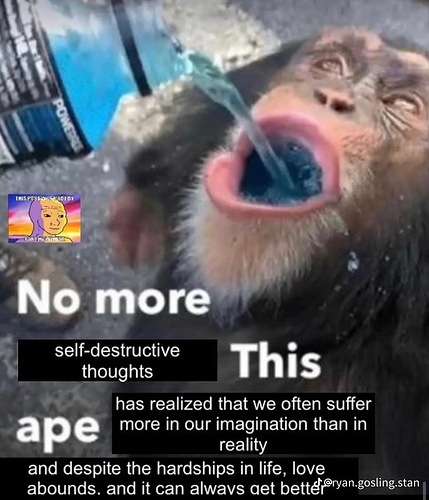 image1125×1309 225 KB
As for the position in irony I feel this may be more firmly post ironic as these are separate and distinct images instead of the edits of classically schizo content that I touched on in the original post. 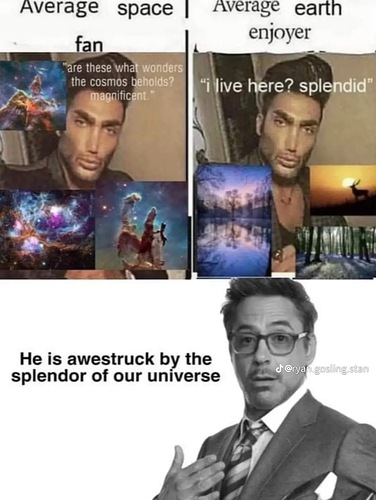 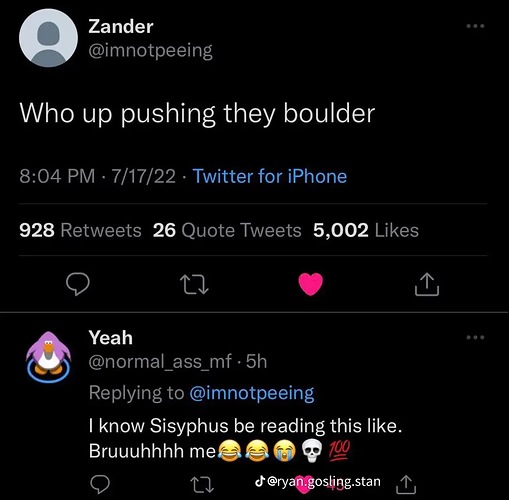 This is very exciting especially after the crackdowns on schizo/realrx/melancholy content Tik Tok has carried out over the past couple months and to see the return of this genre in the algorithm and also a hint at where it's headed is something to look forward to. I'll need to do some more digging on the posters as this is something that I've only noticed today, so take this as a quick update.

This almost feels like an oscillation; that we will ping pong between absurdist optimism and cynical bleak death drive schizo posting mentioned earlier.

Each oscillation hopefully pushes the discourse along. That's the hope with schizo posting; movement without direction and eventually something will emerge out of this mess. Just participating without necessarily having an end goal.

I read the article, and my conclusion is I think I've certainly seen some ineffable memes.