Some thoughts on the connection of Schizoposting to Mental Health

Seong has asked me to share this text from Facebook so we can discuss it here further:

I've seen multiple of my FB friends declare the death of Schizoposting in different ways over the last couple of weeks, and I can't help but feel the same, as in: It's lost the "edgy sting", it has been recaptured etc., which is interesting, because the whole fascination for the "deviant schizophrenic" in Deleuze and Nick Land was imo the fascination for something inherently uncapturable, something that was always "off" of reality because it was defined that way.

How is it possible that something supposedly uncapturable was, in the end, captured? My interpretation is that the whole advent of Schizoposting could be only a symptom of a general societal change on how we view Mental Health / Illness. It goes together with the whole trend of 4channers and other shitposters calling themselves "autistic"*, and, on the 'flipside' of internet culture, with diagnoses of mental illness becoming a sort of character trait on TikTok and Twitter. On the more broader societal side of things the changes would be an increasing acceptance, understanding and representation of mental illness; the change from closed institutions to community psychiatry (which brought mental illness back into communities); the advent of medication (which is, as the opening of institutions, an older development, but I think it's effects still play out today). There's also a lot of talk about "narcisstic abuse" coming up, which is mostly about how to deal with supposedly narcisstic partners or family members.

The problem is: One can easily identify all these things as having to with some kinda change on how we view mental health, and how mental health slowly takes a bigger place in our everyday lives. But how exactly all of this fits together is very very vague; after all, how do the pseudo-subversive ramblings of a shitposter about UN-Blue-Helmets connect to posters in your Tram providing suicide prevention hotlines?

What does that mean for Schizoposting? Simply that I think it never was that subversive. If I had read more Deleuze I could probably turn this into some critique about how rhizomatic structures are just postmodern capital in disguise. But at the moment it suffices to say that Schizoposting, like other trends started by 4chan-nazis, will be normified.

I also saw that the german Belltowernews published made an article about Schizopilling, if anyone is interested I might try to give a summary: https://www.belltower.news/terrortrend-schizopilling.../

*If anyone has knowledge or information on when and where this trend (4channers calling themselves autistic) started btw, I would be interested to know 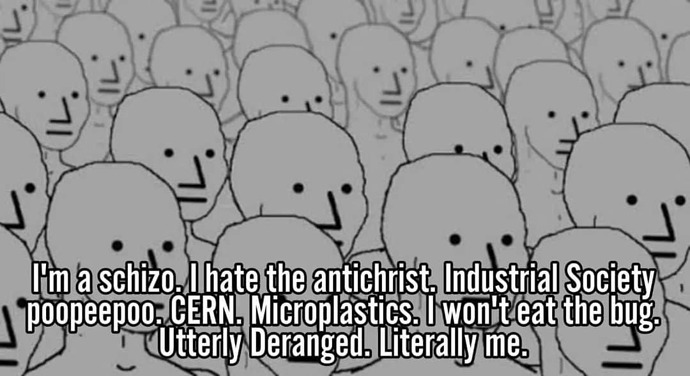 Schizo posting has been a reboot of quirky girly memes, back in 2015 Tumblr was full of this stuff with Juzt girly thingz etc posting the most bizarre meta memes. Schizo posting has colonised feminine 'schizo' memes and is now catered towards a male audience.

I'm guessing the trend with 4channers referring to themselves as being autistic started with people who were literally autistic referring to such, and then other people picking it after them thinking it was ironic because no one can really understand the mind of anonymous.

there are a couple different types of Schizoposting that i've seen:

if you're talking about something 'uncapturable', that's definitely the esoteric side. unknowable mystical shit that's entranced people for centuries (alchemy, astrology).
all that got wrapped up in a package of noise, the same kind that's appealing to people who scroll thru tiktok and twitter, eternally searching for content that tickles neurons in a novel interesting way. add in some abstractly scary imagery to keep your attention, and imo that's schizoposting.

in the short term, mental issues are easily drowned out by noise. long term though, the underlying issue is never addressed, and you get real problems: asocial people hooked on content tubes trying desperately to feel better about the problem they don't even understand, let alone know how to ask for help with.

i think schizo memes tapped into that uncertainty of how to deal with mental pain, created by an audience who experienced it personally (like asocial 4chan nazis). but the very real mental pain takes the spotlight after a while, and the meme is watered down to its naive component themes while the mental health stuff diverges into its own sphere of 'mental wellness culture' that you describe: how to deal with shitty family members, or being autistic and not realising it.

it's human to be lost in a sea of noise, and grab onto the wisps of patterns you think might be a lifeline to escape. but if schizoposting is 'dying', it might be cause the sincere help you can find in online communities is more appealing than rolling around in the muck and wanting to kill yourself.

interested to see what others think about this, it's a weird new frontier of culture that we're living thru. we'll prob only fully understand it in retrospect.