As some of you might know, I am currently writing a thesis on geopolitics on the russo-norwegian border. Coming from a political science background, my leap into geopolitics got me thinking closer to geographers, with reasonings revolving around the notions of space and territory. Sadly, my knowledge of Norwegian didn't allow me to conduct an analysis of Norwegian representations (a crucial concept in French geopolitics). Classes and writing conducted me to develop a bit of a thinking around memes and geopolitics. Here are some thoughts I had.

What I mean by geopolitics; definitions etc.

The usual definition of geopolitics by French geographers is quite simple and comes from Yves Lacoste, the founder of the Paris 8 university department of geography and patron saint of the French Institute of Geopolitics (IFG):

Geopolitics is the study of power rivalries over territories.

That's it. I think it comes from his 1976 book "La géographie, ça sert, d'abord, à faire la guerre" which can be translated to "Geography is first and foremost meant to wage war", although more casually formulated.
French geopolitics is quite close to critical theory, and Michel Foucault even published a text in Hérodote which was Lacoste's journal (although mostly to dunk on the whole idea of space and geography). Thus, discourse and representation analysis is quite central to it. But let's not forget that the notion of space half of the definition of lacostian geopolitics. Also, in this regard geopolitics is not a science but a cross-domain discipline. Some definitions now, so that what I say doesn't sound too blurry.

Territory : A space that has been appropriated, either abstractly or concretely; that is through planning/developpement or control of what's going on upon it.
Representation: Formal entity – always spatial and temporal, material and mental, individual and collective – which evokes another entity and thus promotes the cognition and action of individuals. Sounds a bit foggy but you can imagine it as an idea which regroups subjective perceptions without being fully relativistic and preventing the researcher from looking for purely "rational interest".
Popular geopolitics: ‘Popular geopolitics’ considers films, magazines, television, the Internet, and radio and the way in which they contribute to the circulation of geopolitical images and representations of territory, resources, and identity. I think this definition which is found in a very short introduction eludes what this topic could cover, that is geopolitics as the analysis of representations of space and conflict through the eyes of lower classes.

Usually, evoking memes through the lens of geopolitics leads to the idea of meme weaponisation; may it be about "cia psyops" or "russian trolls". The most obvious recent example is the Ukrainian republic's official twitter account which very successfully conveyed Ukrainian representations to the english-speaking internet within the Ukrainian propaganda strategy.
Before this successful precedent, it seems to me that meme usage by the state apparatus was very much relegated to covert actions related to information control and dissemination, such as the Russian influence in west Africa. Indeed, how to distinguish this strategy from propaganda? In this regard, I think the most interesting prospects regarding meme studies and geopolitics is somewhere else.

In my opinion, memes have the potential to be a very interesting topic of research when taken through the lens of popular geopolitics. Due to the way memes are created and conveyed, they relate to an instantaneous, horizontal and reticular model of information dispersion. Thus, meme analysis correlates highly with the definition of popular geopolitics I drew above.
Furthermore, using the idea of cyberspace as the territory over which power rivalries are set (or at least displayed), one can transpose geopolitical analysis to meme studies. Social networks are a prime terrain for conflict, sometimes insignificant (eg cyberbullying) but some other times translating large scale international (russian-baltic "forest brothers" memorial twitter controversy, russian-ukrainian conflict) or local conflicts (rise of Trumpism, even that of Eric Zemmour in France) to the internet.
Something can be said about the analysis of these contents and their diffusion on internet, on which the GEODE lab of my university worked (see picture below). 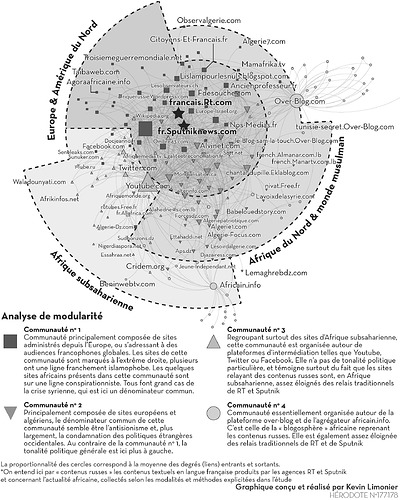 Claude Raffestin, swiss geographer inspired by Michel Foucault in both his theories and his awful writing, studied territoriality as networks of power relationships between actors. In this regard, memes have a great deal of importance in tightening relationships within communities as well as creating some sort of power ratio between poster, commenter, lurker, or moderator.

Memes within their publishing space

Considering what's said above, something needs to be said about the relationship between memes and the context in which they have been published. A previous post explored local memes extensively, in which I commented about some local french memes. These memes can sometimes be qualified as means of abstract territorial appropriation, a way of further forging identity relative a territory. They often act as "theaters" in which admins and comments dunk on other communities (for example peripheral France and Paris, or Britanny and Normandy, sometimes over trivial stuff such as salted butter in order to make this rivalry into something peaceful and humorous, even petty). They sometimes have this almost mechanical unfunny character which makes me think that identity and representation display is often more important to these pages than actual memeing.
At another spatial level, social networks themselves can be analysed as the territory over which power rivalries are set, but also as the stake around which the conflict revolves ; one can obviously think of 4Chan and the conflicts its members had with Tumblr or Reddit. This kind of conflict even leads to "acts of war" which translate to raids or have real world consequences such as doxxing.

Do you guys have any comments on this? Do you feel you have been implicated into local geopolitical conflicts through "memetic warfare" yourself?

This is really wonderful work, @Rekka!

I suppose that we are no less "implicated into local geopolitical conflicts" by engaging in politicised memes than we are by holding politicised beliefs, whether social, historical, economical, or otherwise. The more interesting question is whether memes have uniquely geopolitical dimensions to them. Insofar as the Internet does, memes do too. A Google Scholar search for "memes" AND "geopolitics" brings up over 2000 results, so the intuition about the relevance of meme studies and geopolitics is shared by many (see "Weaponizing Memes").

It seems like the beginnings of a uniquely comprehensive framework about the geopolitical understanding of memes and cyberculture. From what I have seen of geopolitical meme studies thus far, two major strands exist:

Perhaps your approach can provide a more elegant way of understanding the relationship between memes and geopolitics.

I like the way that you have laid out your framework in a sort of descending order. This is a summary of what I understand from your post:

Additionally, digital platforms often represent physical entities such as an electrical grid. Furthermore, unlike paper maps, digital platforms can facilitate interaction between the users and the entity being represented; hence, cyberattacks can target power grids as they become more digitised. In this way, representation becomes increasingly causal as well for every level within this framework (e.g. popular geopolitics is represented as well as manipulated through and by the platforms). So they form a kind of looping chain (of loops).