Continuing the discussion from Introduce yourself!:

Leftist political livestreaming has become an increasingly visible subset of Twitch.tv content, and internet livestreaming content generally, with Hasan ‘hasanabi’ Piker the most prominent among content creators in this new genre. This thesis aims to understand how leftist political livestreaming fits into a historical lineage of partisan political broadcasting, from talk radio to present day; structures labor and generates income; and how its programming engages its audience through its use of technological affordances, collective affect, and an integrated materialist analysis.

In the first chapter I trace the lineage of Twitch’s political streams. I synthesize previous literature beginning with right wing talk radio stars like Rush Limbaugh, on through television political media, liberal infotainment, online gaming, and online radicalism. With this context I situate Piker and other leftist political livestreamers in historical context, outlining the cultural and technical affordances they draw from legacy media. Alongside this, I also describe the novel adaptations both they and the format of livestreaming introduce to political media.

In the second chapter I take a political economic approach to political livestreaming. Drawing on statements of streamers, public-facing company policy, trade blogs, etc. – I first break down the way that both streamer and audience labor are configured on the platform. Building from that, I analyze how Twitch operates as a payment processor, handling and incentivizing transactions between audiences and content creators. And finally, I discuss how Twitch is able to exert political power over its users by gatekeeping their income, producing a chilling effect, which affects political streamers’ coverage.

In the third chapter, I describe the experience of a Twitch stream on Piker’s channel using mixed methods. Combining autoethnography, the walkthrough method, and computational text analysis; I describe the programming of the stream’s content itself and its phenomenological and affective dimensions. I use this description to show how political discourse is shaped and received by sides of the streams’ communicative circuit. 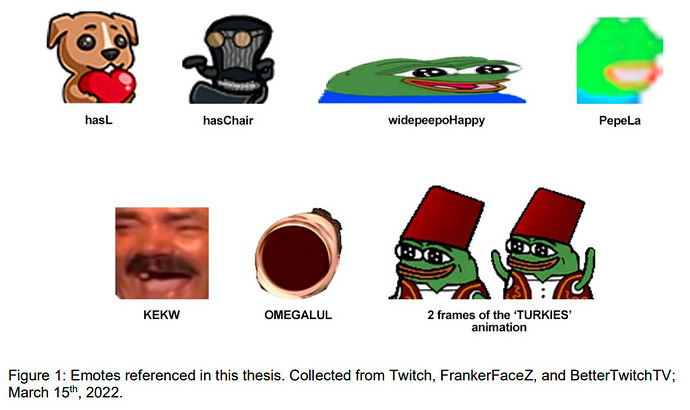 Piker’s personality as a person is not the only draw to news coverage on his channel though, the participatory audience of the chat is also a central part of the experience, performing a number of tasks alongside Piker. As mentioned in the prior chapter, when Piker needs assistance in sourcing a claim, or simply wants to find something online, he might ask the chat to find a link: does anybody have the link to [x]? This sort of crowdfinding relies on the collective, distributed intelligence of the chat where “no one knows everything, [and] everyone knows something” (Lévy 1997, 13-14). Expand this mediated brain to a live audience of several tens-of-thousands of people, and frequently the link in question is found quickly. This kind of sourcing is also transformed by the gaming logics inherent on Twitch, it becomes an attention game of “ludic spectatorship” (Boluk and LeMieux 2017, 65) in which audience members vie for the social capital associated with having one’s message read on screen.

This sort of also attention game also expresses itself with critique of Piker’s opinions or analysis, in which critical audience members or outside interlopers try to write the most inflammatory criticisms possible in order to get themselves banned or fluster Piker. This, of course, has led to an ambivalent community metagame of “jebaiting,” or insincerely writing inflammatory messages in the hopes of getting Piker to read their chat log and see a different ‘gotcha’ message. While ancillary to the content itself, these sorts of practices make the news feel more conversational and approachable to the audience, and can help to break the flow of the stream into more manageable chunks.

The "attention game" metagame in online subcultures was pioneered by Anonymous (e.g. gaining mainstream news coverage for inside jokes), and GamerGate (which @fern describes in detail within the thesis). As he points out, "Leftist political livestreaming combines elements of its explicitly political predecessors with the technical affordances of a platform built for competitive gaming as a response, in part, to the right wing’s grip on online political discourse post-#GamerGate." It would seem that while the GamerGate "swarm" and the journalists and academics it stalked and harassed formed a "circuit" of antagonism, Hasan and his chat form a circuit of cooperation: the chat produces a flow of content and Hasan contributes as a meme curator, providing structure and coherence for the community. In effect, the streamer becomes the platform.

The cooperative, communicative circuit formed by Hasan and the chat is a kind of structural inversion of GamerGate's relationship with its targets. A component of this inversion is the fact that GamerGate sought to make their beliefs and positions less structured and coherent, even whilst taking advantage of the "platform" in order to amplify their message:

Anonymity and fluid membership criteria allowed GamerGate to tactically embrace or disavow a broad range of participants and their actions. In tempocracies, credit and culpability are diluted through functional anonymity. The identity of the author is obfuscated either via platform design or lost in transmission as posts are reposted without context. Dedicated participants can exert outsized influence over the collective self-image of the tempocratic space by laundering their messages through these anonymising processes. Mortensen points out that “the swarm logic of GG allowed all participants to determine their own motivation. It was near impossible to keep track of the individual opinions.” (2018, p. 793). The ephemerality of content and context that characterises tempocracies extend also to identity; users with stable identities were inherently disadvantaged in this conflict.

The above excerpt is from an article I wrote last year;

GamerGaters were correct in their assessment of gaming culture and the games industry precisely because of the conspiracy theoretical nature of their campaign.

Several meme studies and cybercultural research networks were founded in the past couple of years, and they all make variously formal and informal use of various modern platforms like Twitter, Twitch, Discord, and Instagram to self-organise. These are platforms designed for the social networking metagame; researchers hack them into performing alternative functionalities, just as political viewers or the gaming viewers sharing Hasan's chat attempt to hack the chat to influence the stream's contents. What kind of new circuits will research organised through these platforms bring, and is it feasible to produce conventional forms of research output by (say) streaming to an audience?