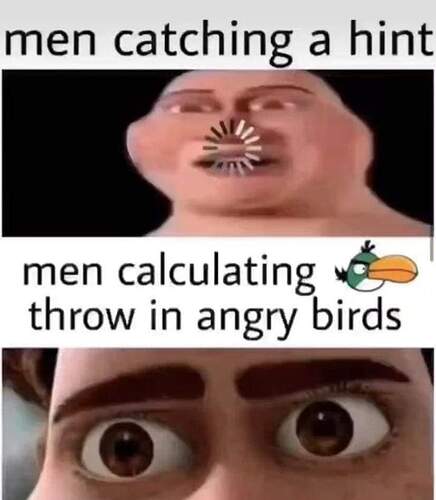 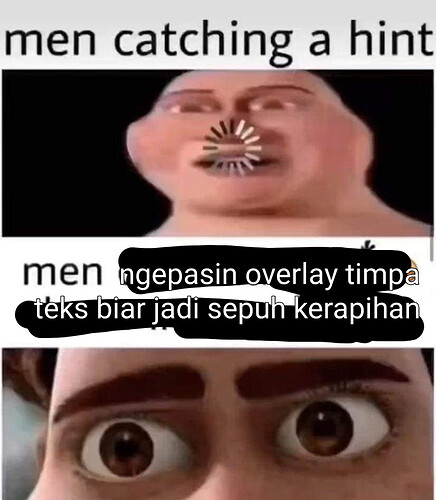 IMG_20220512_151638828×948 121 KB
So basically there is a trend on Indonesian meme culture. This group is specifically made for overwriting existing meme.
The original name was “Timpa Teks: Singularity” but after several iteration (due to fear of getting zucced) it became “Timpa Teks: Sanctuary”, taking place in a dead group. Timpa Teks roughly means Overridden Text, the core idea of this meme movement. It became a famous group as you can make any kind of content with anything that has text previously, and it’ll still be mostly funny because it took the original context to another unrelated way.

It also bred new commenting trend in the comment section, one of it is “Kerapihan”, means “too neat” implying that the OP edited the meme far too clean and crisp that it’s not overridden anymore but just edited out.

The first was the original meme

The second picture of the meme I made. The bottom text mean “men when fitting the text overlay so that they will be called a Neat Expert” 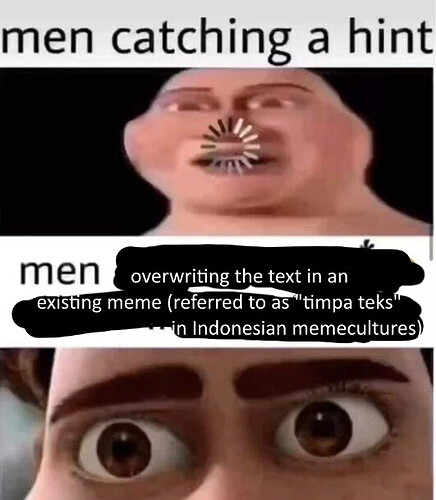 This looks like r/bonehurtingjuice, but with an emphasis on making the text overridening obvious. Is it necessary to understand the source media to find the most of funnies? Had a quick glance and saw that original images are rarely posted in the comment sections.

Also, I wonder if the zucc scare was from the Indonesian Reporting Commission? (iirc they were behind the taking down of a few international meme groups, and force a bunch of others to go private as well)

usually the joke over the overridden text is already funny by itself, but people at the comment section will happily provide the original context, so that people know how far the context was pulled from the original text

about the zucc scare, not really. IReC is not really a threat for about a year or two. because in the end it's the arguably working FB AI that decides whether a group is safe from its demise. I handled many groups now and I can tell you that many of the current warning of the group is from people jokingly tell someone to "punch them" (it's kinda common to jokingly say "let's fight" when two friends have different taste on certain things) which is so broken that I even asked members to not use certain words because I know that it will be flagged as harassment.

but yes, IReC is that reporting group. though I saw them do a good reporting sometimes such as reporting private animal abuse group, we worry more with zucc's own judge. 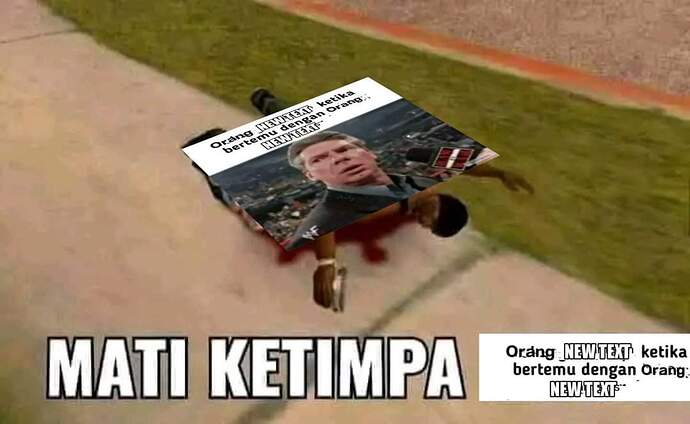 Caption:
"Died from a hit by [an overused overridden text meme]"
Note:
"Timpa" can be used for two things, either "overwrite" in text context and "get struck down by" or "get hit by"

I knee jerked and posted this to a friends group chat because we always like memes in a language we don't understand.

I guess that's an accidental additional layer here since the meme was meant to be understood to be self referential. beautiful