I adore the AI's ability to borrow from convention, but in a naïve way that often ends up creating something unique. Particularly in things like fashion and design. In discussing this with a friend, I've noticed a weird intersection between AI and avant-garde/haute couture fashion.

High fashion often tries to bend and accentuate convention to its breaking point and see what happens. AI image generation does the same thing, but bends convention because it doesn't have a fundamental understanding of why something is conventional; it accentuates common elements strictly because the AI has more examples to draw from. It is a distilled example of "form over function" because the function is alien to its creator. 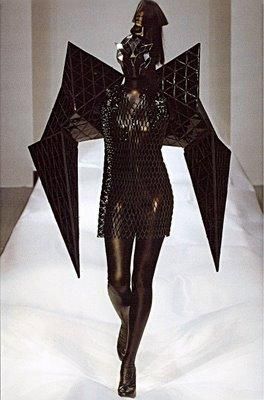 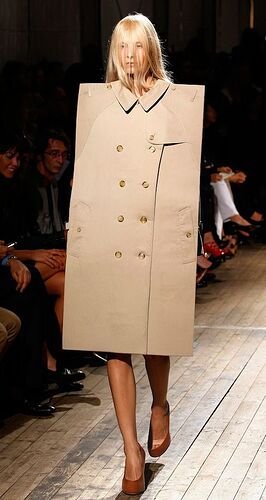 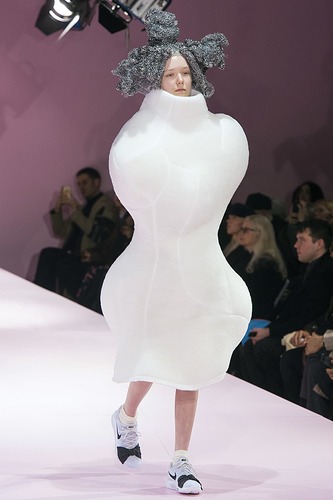 To tie this back into AI, let's try to replicate a concept by designer Rei Kawakubo. Here is a quote I took from a Washington Post article:

"18th Century Punk. The 18th century was a time of change and revolution. This is how I imagine punks would look like if they had lived in this century." 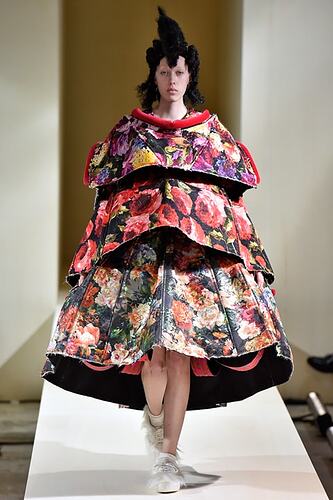 And here are my attempts at getting Dall-E to create something based on the same prompt. 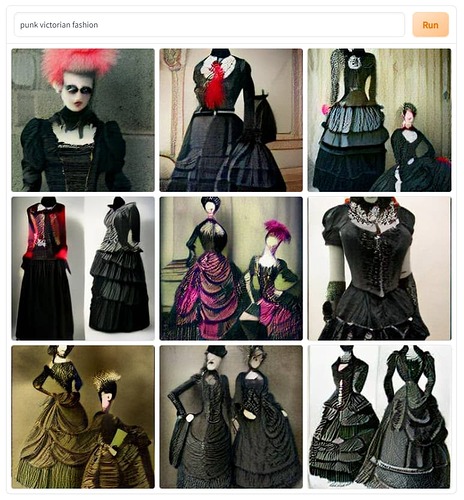 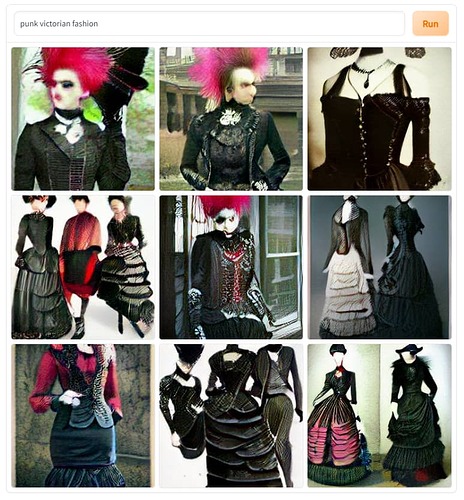 There's a massive difference between the two outcomes, but both can be used for the same purpose: to break boundaries and inform future designs. Haute couture is a painstaking process used to creatively and commercially prototype design concepts that may influence Prêt-à-Porter (or ready-to-wear) designs that are actually worn outside of the runway. AI can be used as a conceptual runway for the same purpose.

As I put it (terribly) earlier today:

AI assists in the weirdest and most ambiguous part of the creative process, where concepts and influences are mashed together into something (arguably) original. I personally don't believe this devalues the end product as a rule.

With that being said, I'm proud to put on this generative fashion show. I am your host, someone who knew nothing about fashion earlier today. 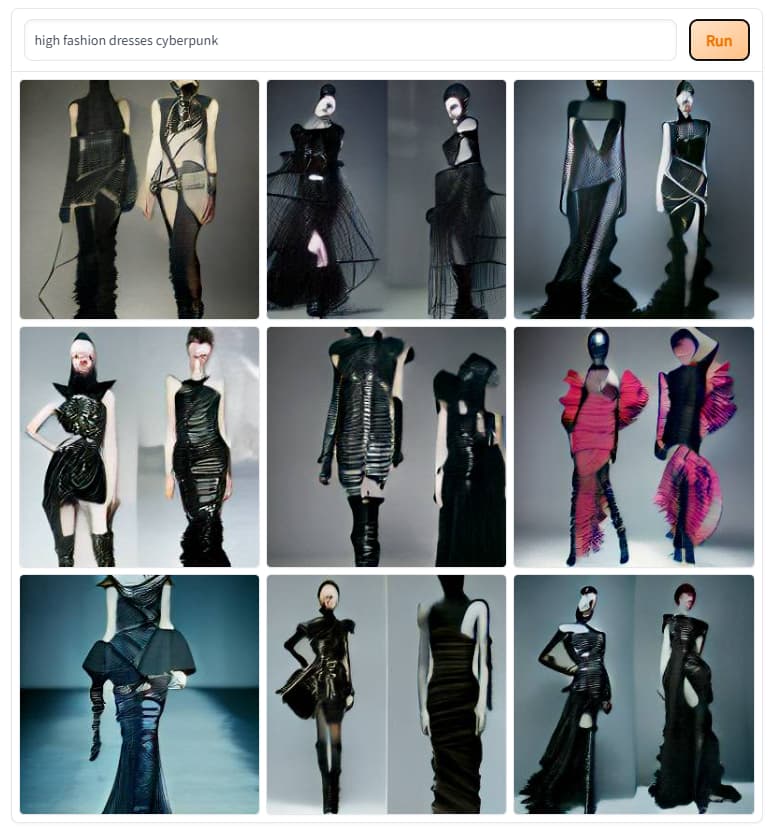 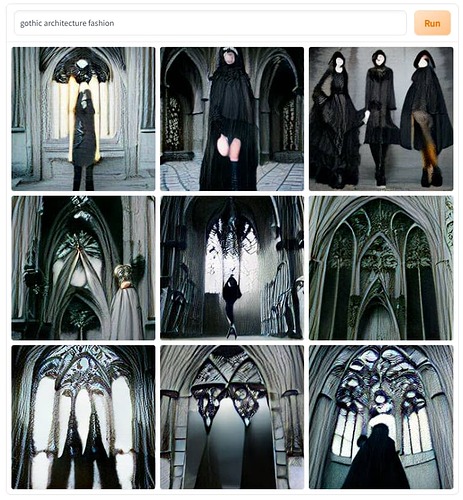 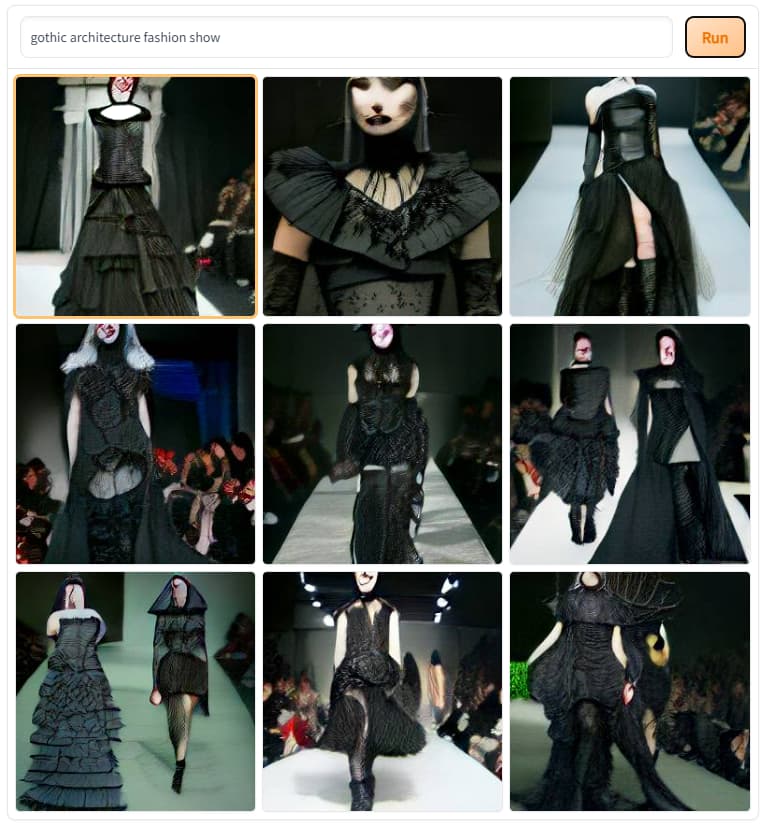 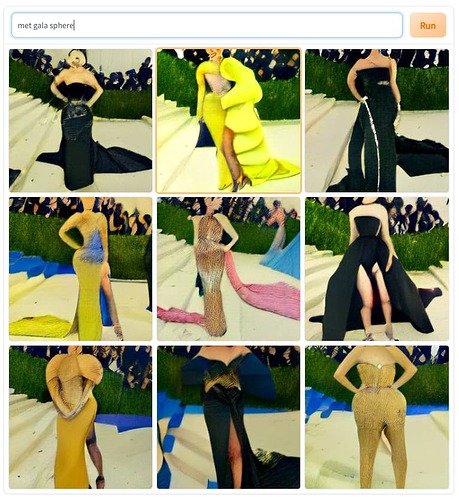 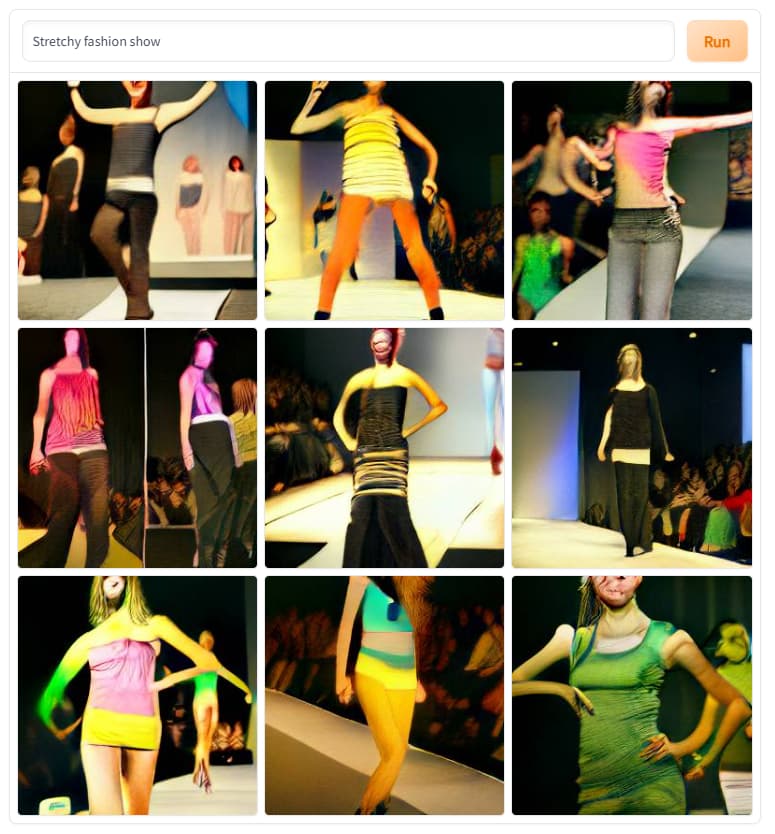 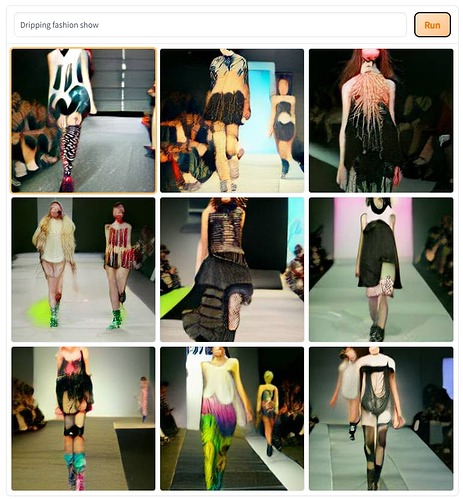 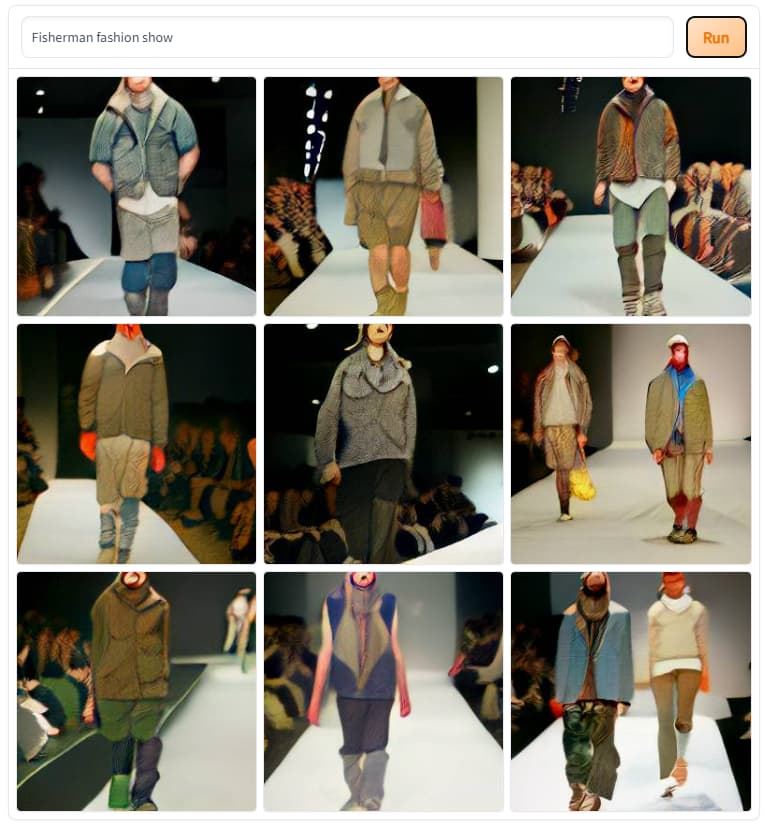 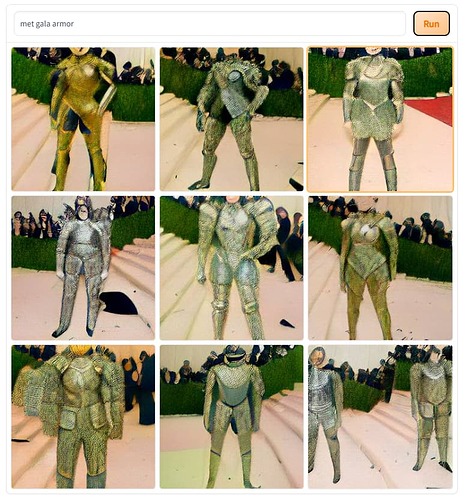 Please share your own creations if you end up making any!

This is fun. OK so thought about fashion history/changes? that had the shapes you speak of so of course thought of Bauhaus 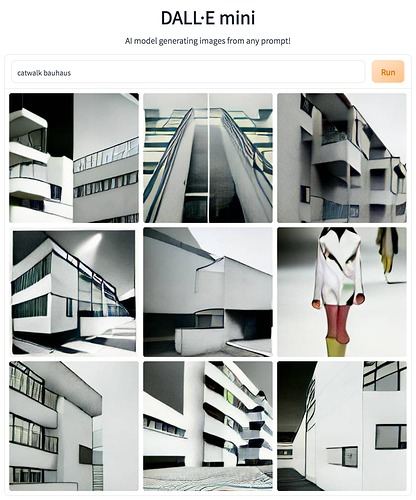 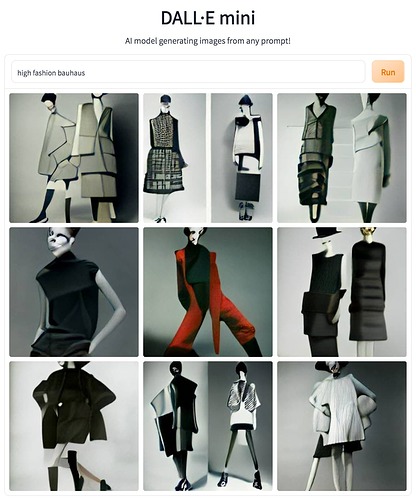 I thought it'd be fun to have another AI generate the prompt, so i asked GPT-3: 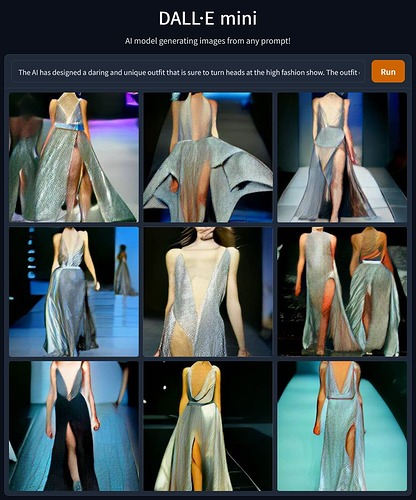 Wow! I didn't think DALL-E would be capable of aggregating that many descriptors into something actually coherent. Searching some of the same terms generated by the AI doesn't result in anything remotely similar or accurate to these descriptors, meaning that these generated images are the easiest (if not the only) way to see something similar to this design.

I realized after I published this forum post that I'd sort of lost the plot and drifted from the concept of memes in this discussion. The initial idea was to use the template of absurd fashion to generate clothing that is both unique and hilarious in its absurdity, pushing the already taut boundaries of reasonable clothing design past their breaking point until we have a funny meme.

What you ended up making with that "high fashion bauhaus" prompt is nothing short of incredible. The surreal aspects only stand to elevate it as a work of art. While it fails at being a funny meme, it sure as hell succeeds at something.

haha yes good point. I think the only times I've seen it been useful for humour is more storyline based rather than art? for instance I got a great result from "emojis starring in a film noir directed by David Lynch" OK so I guess this is somewhat funny if you understand the fact that the absurdity of this is almost imaginable with the director David Lynch. What was better however, was there were almost story frames (totally random) but they just so happened to really work.

Poor sweet AI it simply has no idea of humour, that's something we have to find and it happens randomly, I've not yet had it make me properly laugh only really say "ah that's great!" only in so much as that is what I would have imagined myself.

I like that idea, that even absurdist humor benefits from some sort of narrative, even if it's imposed by the reader and not the author.

You could say that the absurdity of how the common person perceives high fashion comes from the presupposition that it belongs on the runway because it's a paragon of style and design. The outfits are ridiculous because someone created them intentionally and it is assumed to be beautiful because of their publicity; there's a disconnect between the common person saying "who the fuck would wear that" and these avant-garde designers who are intentionally creating something surreal. That, in itself, is a narrative that makes things more compelling than "haha funny dress".

You could also say that in AI-generated fashion, the lack of a human designer does away with that humorous narrative, but I would say that it subverts it. Instead of being a skilled designer making something ridiculous, we have an entity that has a wider reference catalog of what a dress looks like than any human ever will. Despite this, it will never really understand what a dress is, or why it shouldn't have 3 sleeves and a large hole in the crotch. That tension between hyper-intelligence and hyper-naivety is a narrative in itself, and that effect compounds with the human-generated narrative that often comes about when confronted with the absurd (e.g, the mutilated victim of Velociraptor Big Bird in the bottom-left panel). 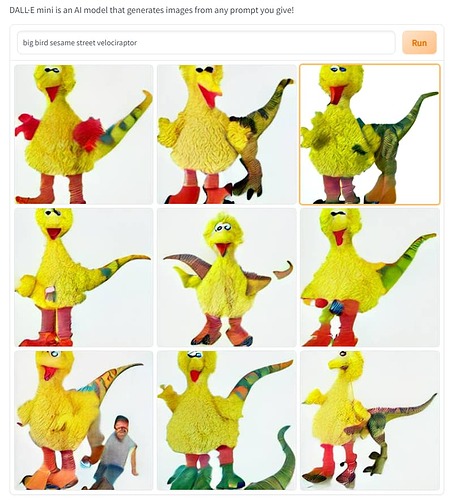 I'm going to be working on creating some Dall-E (or I guess Craiyon???) collages based on fashion, but this time with the express intent of finding some funny ones.

It's very odd that only a few minutes before reading this reply I was replying to a thread on TPM facebook group with something of a similar element to our discussion.

I believe that most humour comes from some form of expecting one answer only to be bettered by something different. So far for me, Dall-E has gone to somewhat expected places; Although panel with random child is funny as you point out, mostly because of the story we put in out mind but also the idea we only believed the object (big bird) with the variable (velociraptor) and this is and unexpected point which is the AI's doing.

A note to add re high fashion and I guess memes on a more open basis is that there is a designer called Rick Owens who has his designs take off in the meme world. I think most famous was this

I put in the exact term i used for google (Rick Owens penis meme) and AI did this: 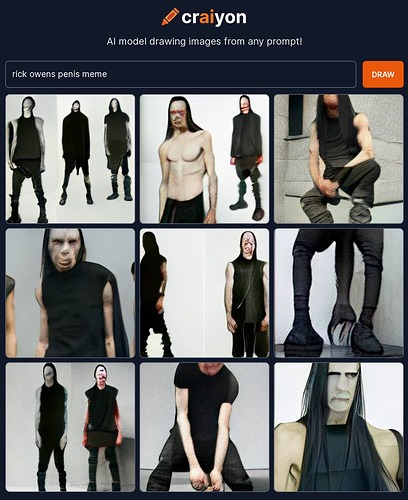 unexpectedly funny because it appears top right is actually a man with a penis head wearing Rick Owens clothes. Amazing actually because so much care it appears has been made to try to piece the style together but so odd it made the man's head a penis?

How uncanny is it that my random example of a crotchless dress happens to be a real thing that has relevance in the meme world?

Here's my take on how AI is (and is not) subversive: When we punch something into Dall-E, we have a vague idea of what we expect to come out the other end. To some extent, the joke has been made before the images are generated. To me, the appeal of Dall-E is that there is a wide variety of ways to subvert the monkey-brain-centric humor you're expecting when you read or write the prompt. Here are just a few of the variations I've thought of:

Images can remind you of certain things and invoke unrelated concepts in a way that can't be predicted or harnessed by the AI. For instance, the top-middle panel here mirrors "chad" iconography, which probably isn't intended by the person who typed the prompt or the bot but is nonetheless exploitable. 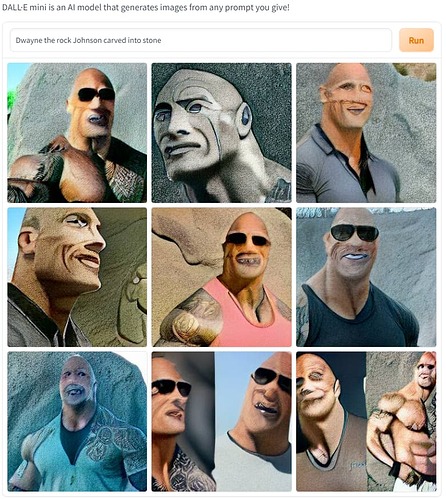 Some humor is derived specifically from the fact that the meme comes from a bot, which is both frighteningly intelligent and dumb. There's an element of "what does it know that we don't?", while still being naive enough to make your penis-headed man above. Like a fellow forum-poster posited, it is a context-dependent meme, not just regarding the potential subjects of the meme but the AI-generated format as well. 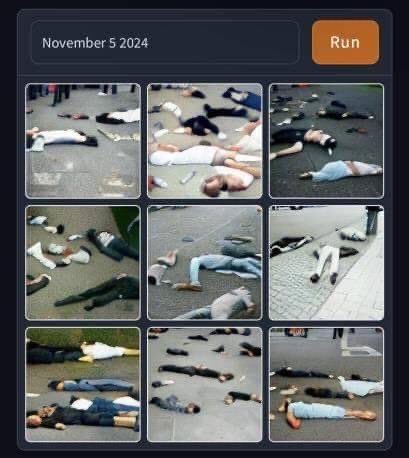 And of course, some humor can be derived from the fact that things just look silly. A word that keeps coming to mind is "skung", which was coined by the wonderfully aesthetic ThorHighHeels to describe weird, janky animation from the early years of 3D. Same sort of energy. There's also something kind of pleasant about our pattern-recognizing brains being able to recognize these distorted low-resolution representations. Maybe they aren't adequately realistic to dip into the uncanny valley. 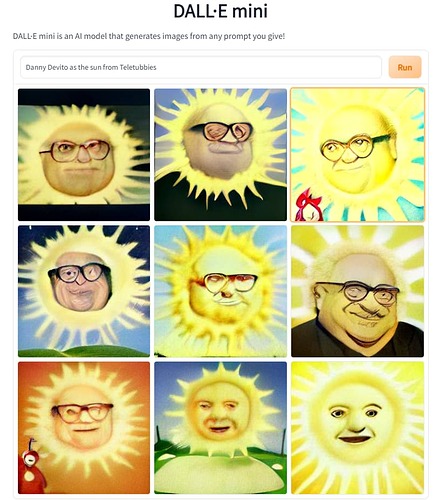 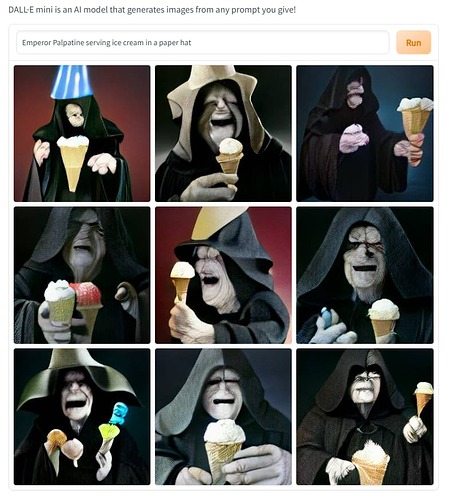 Update: I was able to forward the prompt to someone with DALLE-2 access! Here it is: